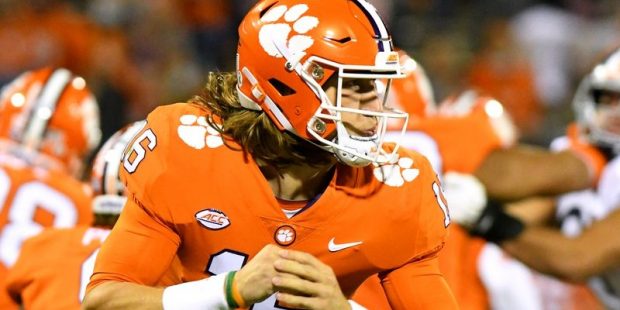 Clemson did not make the College Football Playoff and did not appear in the ACC Championship last season, but they still have 11 straight double-digit win seasons, seven conference titles since 2011, and two national championships. Their 2022 schedule follows a familiar formula: an FCS opponent from inside the state, a Group of 5 opponent, a Power 5 battle, and their season finale with SEC opponent South Carolina. Can the Tigers get back to the College Football Playoff? That will depend on the production from their offense. Don’t miss our College Football betting preview for each of their games.

Clemson opens the season with an ACC game in prime time on Labor Day. Last year, the Yellow Jackets only lost, 14-8, as the Clemson offense struggled mightily. Georgia Tech would only win three games in 2021, and this game foreshadowed major problems for Clemson’s offense all season. 1-0.

Skip Holtz no longer coaches the Bulldogs after a 3-9 campaign last year. Sonny Cumbie, the Texas Tech interim head coach who got passed over for the full-time gig, is the new sheriff in town. 3-0.

Wake Forest won the Atlantic Division a year ago, and quarterback Sam Hartman returns for the Demon Deacons. Rondell Bothroyd returns at edge rusher to key the defense. 4-0.

The Wolfpack return most of their defense from a year ago, and Devin Leary returns at quarterback, but the Tigers should have the talent on both sides of the ball to prevail. 5-0.

BC only won twice in eight ACC games last year. The Eagles do have talent at the skill positions on offense, but the O-line and D-line must both play much better in 2022. 6-0.

In 2019 and 2020, Clemson beat the Seminoles by a combined 80 points. Last year, though, the Seminoles led by three in the fourth quarter before Clemson woke up and won by ten. Even so, they have not beaten Clemson since 2014. 7-0.

Dino Babers is now in Year 7 leading the Orange – with just one bowl appearance. Syracuse did get to five wins last season, but it’s hard to see them doing much damage in Death Valley. 8-0.

Clemson is still a defense-first team, and I see them shutting down the Irish. Notre Dame beat Clemson in double-overtime in 2019, but I see D.J. Uiagalelei getting payback this time. 9-0.

Clemson finishes with three straight at home. Louisville will get production out of quarterback Malik Cunningham behind a veteran O-line. Linebacker Yasir Abdullah had 10 sacks and 16 ½ tackles for loss last year, so he could do damage as well. 10-0.

A new quarterback and a new head coach mean it’s quasi-rebuilding time for the Hurricanes, but their system should be clicking by mid-November. Can they make Clemson pay? 11-0.

Shane Beamer had a fine first year coaching the Gamecocks, but then he finished the season with a 30-0 home loss to an angry Clemson team. 12-0.