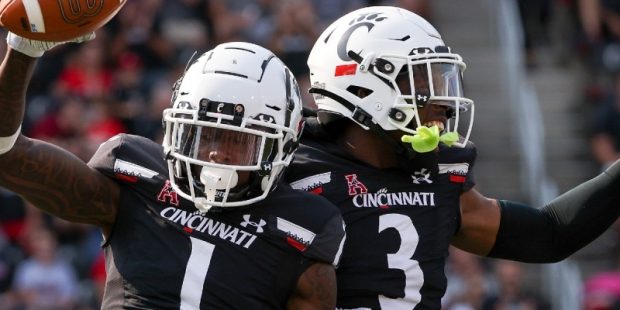 The Cincinnati Bearcats went 13-1 and became the first Group of Five team to play in the College Football Playoff, where they lost to Alabama in the national semifinals. Quarterback Desmond Ridder has moved onto the Atlanta Falcons for the next phase in his career, but thanks to strong recruiting and talent development, Evan Prater and Ben Bryant are both solid prospects to replace him, and the Bearcats bring back all five of their O-line starters. The defense may be down; in 2021, the unit permitted just 16.9 points per game, but seven of those starters have moved on. Defensive backs Arquon Bush, Ja’von Hicks, linebacker Deshawn Pace and end Malik Vann lead the defense into 2022. Can the Bearcats win the AAC again this season? Check out our College Football betting preview of the coming season.

The Bearcats have a chance to make a statement that they should return to the College Football Playoff and belong in a Power 5 conference in their season opener. However, working in a new quarterback on the road against a grueling Arkansas defense will be too much. 0-1.

The Owls come to town to get a big check and then head back home after taking a beating. 1-1.

A MAC team comes to town as the Bearcats continue to work out the kinks and prepare for their date with a Big Ten team – and the AAC slate. 2-1.

Last year, Cincinnati went to Indiana and won, 38-24, as the Bearcats established themselves as the elite Group of Five team. In the off-season, Indiana added Connor Bazelak from Missouri at quarterback, while Michael Penix Jr has transferred to Washington. The Bearcats’ defense should be able to corral the Hoosiers again. 3-1.

Tulsa almost knocked off Cincinnati last year – on the road. Tulsa is a difficult place to play on both sides of the ball, and I see the Bearcats faltering this time around. 3-2.

USF enters its third season with Jeff Scott as head coach. The team hung tough with BYU on the road but, other than that, did not play well (2-10, 1-7 AAC), with its lone conference win coming over Temple. Things won’t be much different this year. 4-2.

SMU has a new head coach, as Miami offensive coordinator Rhett Lashlee comes back to Dallas to take the reins. The top two quarterbacks are Tanner Mordecai, who put up big numbers a year ago but also had a lot of untimely turnovers. Five-star recruit Preston Stone is a redshirt freshman who could compete. SMU has a high-octane offense, but the questions come on defense. 5-2.

Gus Malzahn should be able to have the Knights playing at a higher level than he did a year ago, and he doesn’t have a new quarterback to work in. 5-3.

Navy likes to run that wacky triple-option offense, but they are a lot tougher in Annapolis than they are on the road. 6-3.

East Carolina brings a speedy set of wide receivers and a gunslinger quarterback, but their defense is extremely generous. 7-3.

Temple was the bottom-feeder in the AAC last year, so even going on the road should not present much of a problem. 8-3.

Tulane is a scrappy team that can keep things close, and playing them on a holiday week presents more challenges in terms of focus. Even so, the Bearcats should win. 9-3.