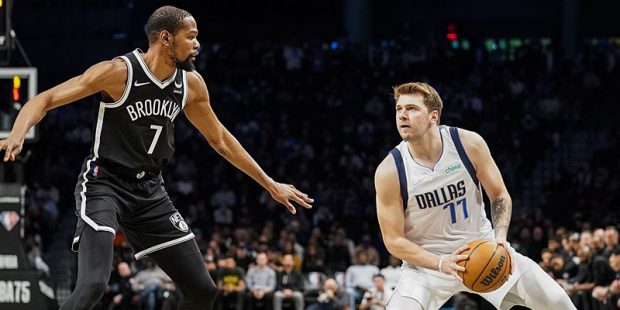 One of the most interesting trades in the NBA this season saw Dallas send Kristaps Porzingis to Indiana in return for Spencer Dinwiddie and Davis Bertans. The move was largely seen as a way for Dallas to get rid of the huge contract they gave Porzingis given the fact that he can’t stay healthy and, when he is on the floor, meshing him with Luka Doncic has been a problem the last two seasons. Porzingis has done well in Indiana – and Dinwiddie has exploded in Dallas after putting up disappointing numbers with the Pacers. In a win over Brooklyn on Wednesday night, the Mavericks had come back after trailing for much of the game and found themselves down, 111-110, with seconds remaining. The Nets doubled Doncic, leaving Dinwiddie open to drain a three-ball at the buzzer over Goran Dragic to give Dallas a 113-110 win. That followed Dinwiddie’s winning three-pointer with 11.6 seconds left on Sunday in Boston. If his renaissance continues, the Mavericks will be a hard out in the playoffs. Thinking about including basketball in your weekend NBA betting? Read on to find our top picks.

Dallas is on a blistering pace right now, winners of eight of nine. Their victims have included Golden State (twice), the Lakers, the Jazz, the Celtics and the Nets. Their lone loss was a head-scratching 30-point home loss to the Knicks, but they have bounced back. In their win in Brooklyn, Luka Doncic had 37 points, nine boards and nine assists, while Dinwiddie added 22 points – 15 in the fourth quarter, as the Mavericks roared back from a 12-point deficit to get the win. Dinwiddie’s arrival has sparked a Dallas team that was last in net rating in the clutch after losing at home in overtime to Oklahoma City, having been outscored by 34.5 points for every 100 possessions in the last five minutes of regulation or overtime, when the score was five points or fewer. Since February 2, that rating has shot up to +50.3, which leads the league by a mile. Expect some regression toward the mean, but for now the Mavericks are streaking.

Next up is a trip to Philadelphia, who have split their last six games. They beat Cleveland on the road on Wednesday, 118-114, behind 35 points and 17 boards from Joel Embiid. James Harden added 21 points and 11 assists. The problem that Philadelphia presents for Dallas is the presence of Embiid, as the Mavericks really do not have an interior presence who can counter the 76ers’ center in the paint. Trading Porzingis made Dwight Powell the focus inside for Dallas, and while he is a tough player who draws charges and rebounds fairly well, he isn’t a match for Embiid.

The Clippers have dropped two in a row and six of eight to fall back to .500 after losing in Cleveland and then at home to Toronto. Their setback against the Raptors came on Wednesday night. Reggie Jackson put up 23 points to lead the Clippers, and Marcus Morris Sr added 22, as the team is now 5 ½ games behind Minnesota for seventh, but also 5 ½ games ahead of the Lakers, who sit in ninth. Significant movement in the standings will be difficult with just 13 games left on the slate, and the Clippers look headed to the play-in at this point.

A trip to Utah is next, and the Jazz have split their last eight, alternating wins and losses. They beat Chicago on Wednesday night, 125-110, behind 37 points from Donovan Mitchell. He got 25 of those in the third period, sparked by a technical foul that he drew after berating officials after a non-call. He knocked down seven three-pointers, setting a team record, and he also broke the team record for points in a third quarter, which Karl Malone (22) had previously held. When the Bulls trapped Mitchell, then Nickeil Alexander-Walker came alive, scoring 14 points in the fourth quarter en route to a 16-point night.