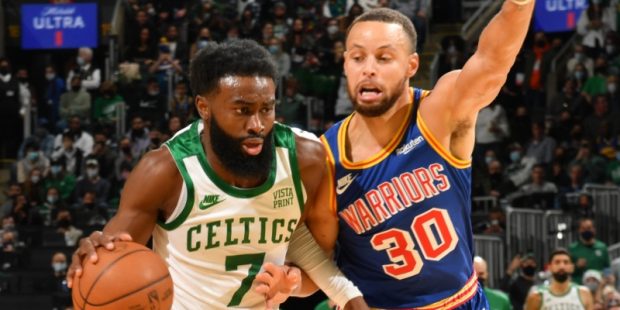 At the end of the third quarter of Game 1 of the 2022 NBA Finals, it looked like smooth sailing for the Golden State Warriors (and those who picked them in their online betting). They led, 92-80, after dominating the third quarter, 38-24. The game also looked headed to the over (which I picked – and which it did hit), as the defenses were teetering, but then Boston made history, as the youthful Celtics became the first team ever to come back from a double-digit deficit after three quarters to win a game in the NBA Finals. The Celtics hung 40 on the Warriors while only permitting 16, turning that 12-point deficit into an emphatic 12-point win. Game 2 is set for Sunday night, so take a look at our NBA Finals prediction as you make your wagering choices.

Why should you bet on the Celtics?

Al Horford had set a record for most playoff games played in a career without a Finals appearance until Thursday night, but you wouldn’t have known he was any older than the likes of Jaylen Brown, Marcus Smart and Jayson Tatum, as he put up 26 points, including six three-pointers, making his 142nd postseason game one to remember. The team as a whole started the fourth quarter 7 for 7 from behind the arc and finished the period 9 of 12 from distance. Brown had 24 points to key the late rally.

The only player who struggled from the floor was Tatum, who went just 3 of 17 on the night, but he decided to distribute instead, finishing with 13 assists. If you think that Boston’s big road win is a fluke, remember that the Celtics are 8-2 away from the TD Garden in this postseason. This does mean that Boston has not been all that great in defending their home court since sweeping Brooklyn in the first round, but for now they have a chance to head home with a huge 2-0 lead.

Why should you put your money on the Warriors?

Stephen Curry scored 34 points on the night – but just 13 after the first quarter. He went 7 of 8 on the night, including 6 of 8 from behind the arc, but he disappeared in the second half. Andrew Wiggins made his first Finals appearance a solid one, putting down 20 points. Klay Thompson was a little quiet, just scoring 15 points. Draymond Green pulled down 11 boards but fouled out in the last minute of regulation.

Otto Porter came off the bench with a dozen points off the bench, picking up right where he left off with a dominant role against Dallas in the conference finals before going down with a foot injury in Game 3. While Boston attempted to control the game with their switches on defense, the Warriors still were able to move the ball around and knock down shot after shot. That is likely to continue, but what is less likely is that Boston will go 21 of 41 from behind the arc again, and especially that Derrick White and Al Horford will combine to make 11 of those again. Golden State beat Dallas by waiting for them to cool off from behind the arc, and it looks like they will take a similar approach again.

Notice that the point total inched upward four points from the Game 1 total. I think the Celtics cool off a bit and that the Warriors are able to earn the split at home, 114-109. I like Golden State to win straight up, cover but stay under the point total this time.