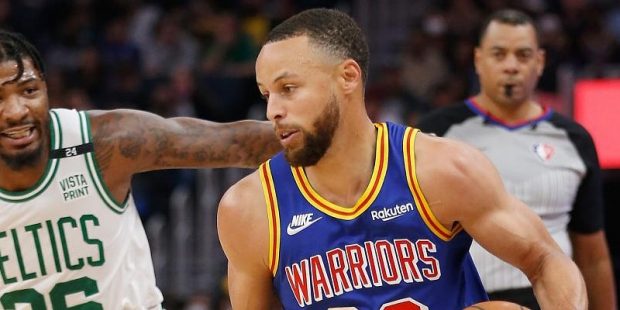 Did you know that the Warriors won an NBA title before the Boston Celtics? When the Warriors still played in Philadelphia, they won the very first championship of the Basketball Association of America (BAA), the predecessor to today’s NBA. They won an NBA title in 1956, a year before Boston started an unprecedented run of 11 titles in 13 years (including nine in a row). The Celtics have won 17 titles, all told, but none since 2008, while the Warriors have ten titles, including a string of three in four years (2015-2018). After spending a couple of seasons decimated by injuries, the Warriors are back in the NBA Finals, favored (-150) to defeat Boston. Let’s take a closer look why taking Golden State is the smart NFL betting pick.

NBA News: Odds for the Golden State Warriors to Win the 2022 Title

It doesn’t seem like home-court advantage has the same significance that it used to in basketball. After all, the visiting team won in five of the seven games in the Eastern Conference Finals this year. The Dallas Mavericks and the Phoenix Suns split the first six games of their West semifinal round, with the home teams winning the first six, only for the Mavericks to go to Phoenix and build a lead that grew as large as 50 in a shocking rout of the Suns in Game 7. However, Golden State has loud fans that know the game and are there to watch, and the Warriors have posted a 9-0 record at Chase Center. This isn’t as raucous as an arena as the Oracle Arena was (and neither is the TD Garden as intimidating, acoustically speaking, as the Boston Garden), but this will still be a tough place for Boston to win.

The Warriors only needed five games to dump Dallas from the postseason, while Boston needed seven games to knock off the Heat. The Warriors will have a full week of rest, while the Celtics will have just three days after a series that was extremely physical. There is the risk of some rust, but given how well Golden State shot against Dallas, I would expect any cobwebs to be swept aside by the end of the first half of Game 1.

With Klay Thompson, Draymond Green and Stephen Curry on the floor, the Warriors have their championship core back together. Each of those three players has missed significant time during the regular season, and the Warriors still snagged the Western Conference’s third seed. Kevon Looney and Andrew Wiggins round out the starting five, which gives them the luxury of having a player like Jordan Poole coming off the bench instead of having to start. That additional depth makes the Warriors a difficult team to match up with once the second units are in the game. Otto Porter Jr torched Dallas in Game 3 but had to miss Games 4 and 5, but he is expected to return for the Finals, along with Andre Iguodala and Gary Payton II. Rookies Moses Moody and Jonathan Kuminga have picked up valuable playoff experience and could contribute. Boston also has a stout bench, but the Warriors’ depth is superior.

Golden State has been here before

The Celtics are a young team with a young coach, neither yet accustomed to the pressure of an NBA Finals. Steve Kerr has coached the Warriors to three championships among six Finals appearances in eight years as the head coach. Curry, Thompson and Green have been here for the entire run and know what to expect. On the Celtics’ side of the ball, Al Horford is a 15-year veteran who makes his Finals debut on Thursday. The core of the team – Marcus Smart, Jaylen Brown and Jayson Tatum – has never been to a Finals. Expect those jitters to show up in crunch time, and expect the Warriors to take advantage.