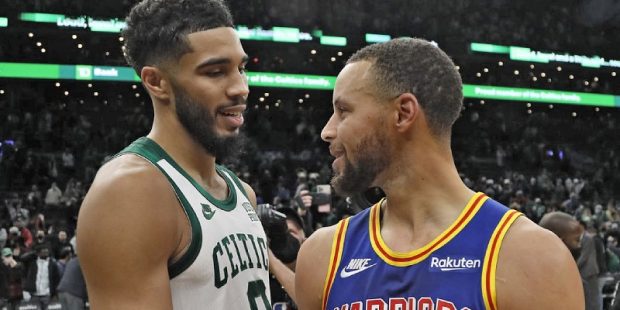 The Boston Celtics and the Golden State Warriors will square off for the NBA championship for the first time in 58 years. The Celtics advanced in seven games despite trailing 1-0 and 2-1 in the series, and despite losing Game 6 at home, 111-103. Jimmy Butler tried valiantly to overcome the Boston defense, carrying the Heat in Games 6 and 7, but the Heat comeback in Game 7 fell just short. The Warriors advanced comparatively easily, needing just five games to eliminate the Dallas Mavericks. Getting Klay Thompson, Stephen Curry and Draymond Green back at the same time has not happened much this season, but it did happen in time for the Warriors to make another title run. In this article, we look at the underdog Celtics (+130 to win the title) and talk about their chances.

NBA News: Odds for the Boston Celtics to Win the 2022 Title

Boston got by Brooklyn, Milwaukee and Miami in the first three rounds on the strength of their shutdown defense. Jaylen Brown and Jayson Tatum managed to collaborate just in time, turning what could have been a disastrous second round into a masterpiece, and now the Celtics are on the brink of another title. The Celtics’ commitment to switching on defense could give Golden State fits. Klay Thompson, Jordan Poole and Stephen Cury all like to come off screens and run misdirections, but switching on screens makes this a lot harder to pull off. In 2018, 2019, 2022 (excluding the four “rebuild” games for Golden State in the rivalry), Golden State only managed 0.853 points per possession when Boston switched on defense. Golden State doe snot like to look for matchups, but given the fact that Boston’s defense doesn’t have any real weak spots, Golden State will have to work hard to get quality looks in the halfcourt offense. Marcus Smart, Derrick White, Al Horford, Brown and Tatum can disrupt Curry in one-on-one defense. The Warriors like to get shots off early, but if Boston can get back and respond in the halfcourt, the Warriors might have to use more clock each possession, which would favor Boston. The Warriors will cough the ball up, and Boston loves to pressure the ball, challenging the Warriors’ efforts to establish space.

I also expect the Celtics to go right after Curry and Poole with the ball. Dallas tried something similar, pushing Luka Doncic toward Curry, so the Warriors responded by having Curry hedge on Luka until he had to slow down, giving Doncic’s real defender time to zip out and recover. This is a moment of vulnerability, as shooters and secondary playmakers will open up. Boston has better secondary scorers (with all due respect to Jalen Brunson) than the Mavericks do, with three or four people who make solid scorers instead of the streaky bunch that Dallas trotted out there around Luka. Tatum and Brown should be able to use the defensive attention to find open scorers.

Finally, let’s look at the paint. Golden State got to play Dallas, who just has Dwight Powell and Maxi Kleber to trot out there in the lane, and they took on Memphis without Steven Adams for half of their series. When Adams did play, he had 12 offensive boards in Games 4 and 5 combined. Boston has had to take on Milwaukee and MIami, who are much more committed to rebounding than their counterparts. Boston can play bigger than the Warriors, with Horford and Robert Williams III. The Warriors can put Kevon Looney in if they want to get big, but that takes a shooter off the arc. Andrew Wiggins is a terrific positional rebounder, and Draymond Green will fight inside. However, Boston could dominate the paint and establish physicality inside, and that old-school dynamic could make life hard for Golden State.