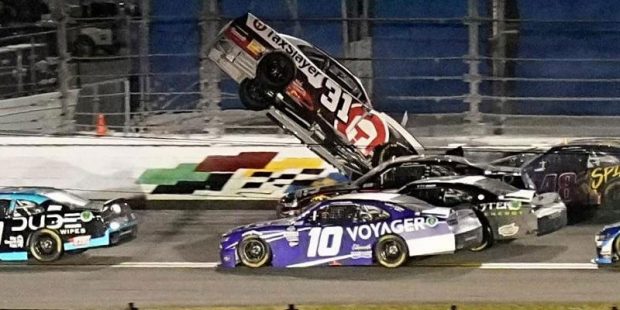 The NASCAR Xfinity Series heads to the Pacific Northwest this weekend, as Portland International Raceway prepares to host the Pacific Office Automation 147, which runs 75 laps around a track that is just shy of two miles. Last week, Josh Berry came away with the win at the Alsco Uniforms 300 at Charlotte Motor Speedway. In fact, his win was so dominant that it was a full 18.039 seconds before Ty Gibbs, the runner-up, crossed the finish line. Justin Allgaier had been pushing Berry for most of the race, but he had to pit on Lap 185 after brushing the wall on Lap 177 and smacking the barrier at Turn 2 even harder eight laps later, necessitating the pit. That gave Berry an easy finish and a winning margin of almost three-quarters of a mile. What will happen in Portland? Don’t miss our NASCAR betting preview, with driver odds and wager suggestions.


Portland has never been on the circuit before, so all of the drivers will be taking on this track for the first time. A.J. Allmendinger is the favorite because he is the top road racer in the Xfinity Series, so he should be able to figure it out first.

Noah Gragson has the second-best average finish on a road course, with an average of 10th place. He has managed to post this average without ever winning a road course race, so he is definitely due.

Ty Gibbs makes his Xfinity Series debut, and he is near the top of the odds list because of the work he has already performed as a driver.

Justin Allgaier has run 30 road course races in the Xfinity Series, with an average finish of 11th, which ranks third among all series drivers.

Daniel Hemric has an average 13th place finish on road courses. Hemric has one career win, and if things go well, then he could break through here and give you some value.

Brandon Jones is another Xfinity Series driver with 30 races on road courses – and that does not include the ARCA road races and the Trans Am races he ran. However, Jones is one of the more inconsistent finishers in these courses, showing he may not be learning much while he is out there.

Riley Herbst is driving a car with SHR that has won multiple road course races in the Xfinity Series, when Chase Briscoe was driving, and now that Herbst is taking the car over, it is time for him to show whether he is ready to race at an elite level or not.

Josh Berry won last week, but he won’t this week. Why? Because he is great on the oval tracks, but he does not know how to win on road courses yet.

Sam Mayer comes in with comparatively little experience, but in five races, he has a fifth-place and two 10th-place finishes, so he could be the quick study who pays big at the end of the race.

Connor Mosack won at Watkins Glen during his Trans Am racing season, and on a track where everyone is new, any road course experience could pay off in a big way.