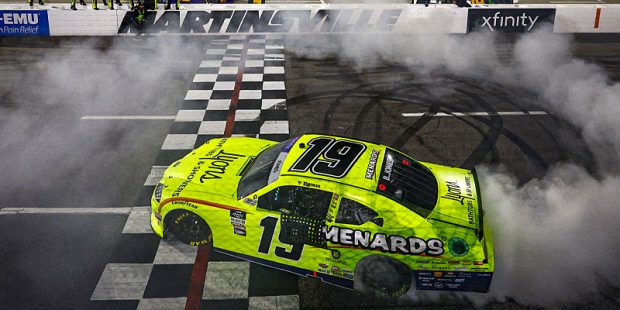 NASCAR moves to the Lone Star State this weekend, and the Xfinity Series race at Texas Motor Speedway is the SRS Distribution 250, set for 1:30 pm Eastern time on Saturday, May 21. Justin Allgaier was the winner last week in the Xfinity Series, taking the Mahindra ROXOR 200. Allgaier ended a drought of 34 straight races without a win, dating back to the Lady in Black in 2021. Noah Gragson came in second by 0.259 seconds to give JR Motorsports the 1-2 finish for the second straight race. JR Motorsports drivers have won three consecutive Xfinity Series races and three in a row at Darlington. A key moment came in the pit, as Allgaier came in third behind Gragson and Ty Gibbs at the end of Stage 2, but the crew got him out first during the pit stop in Lap 92. Let’s take a look at this weekend’s race as you plot out your online NASCAR betting decisions.


Sam Mayer has five top-five finishes in his last six races. He came in fifth last week at Darlington, zooming up 13 spots in the last three laps. He has a dozen starts on tracks that run between 1 and 2 mil3s, and he has two top-five and four top-ten finishes on those tracks.

Josh Berry makes his second start at TExas Motor Speedway. Last year, he started in 28th and finished in 19th place. In 21 starts at tracks running between 1 and 2 miles, he has two wins among seven top-five and ten top-ten finishes, and he has led the field for 152 laps. He is currently in fifth place in the Xfinity Series standings, 93 points behind first place.

Noah Gragson is on fire lately, with finishes of first, fourth and second in his last three Xfinity Series races. He has made six starts at Texas Motor Speedway, with two top-five and three top-ten finishes, leading 56 laps overall. In his last three starts here, his average finish is 4.0. Gragson has 78 total top-ten finishes in his career in the Xfinity Series, and 38 of those have come on tracks running 1-2 miles, and five of them have come in 2022.

William Byron won the Xfinity Series season championship in 2017, and he makes his first race in the series since then. He has two career starts at Texas Motor Speedway with a top-ten finish in each. He has 17 starts at tracks running between 1 and 2 miles, and in those starts, he has a win (at Phoenix) among seven top-five and 12 top-ten finishes, and he has led 119 laps.