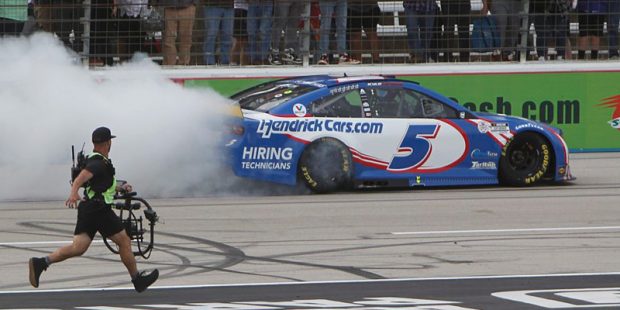 Tyler Reddick came away with the win in the NASCAR Xfinity Series SRS Distribution 250 last Saturday at Texas Motor Speedway. Reddick had run with the leaders all day, but with 31 laps, he pulled off a highlight-reel pass and kept the lead the rest of the way. This was Reddick’s 10th career victory in the Xfinity Series in just his second race in the series of 2022. He last won an Xfinity Series race in 2019, when he won the series championship. He beat William Byron, another Cup Series regular, by 1.825 seconds. The race featured an unusually high 11 caution periods. Sam Mayer came in third and Justin Allgaier came in fourth. Noah Gragson, usually a contender who holds the second spot in the series driver standings, settled for 36th in the 38-car field after ending up in a chain-reaction accident at the beginning of the last stage and then heading into the wall due to a tire problem just five laps later, a major drop from the pole position to start and a Stage 1 victory. This Saturday, the series will move to Charlotte Motor Speedway for the Alsco Uniforms 300, set to start at 1:00 pm Eastern time. You can catch the broadcast on FS1. Let’s take a look at this weekend’s race as you planning your NASCAR betting decisions.


Noah Gragson had the top car on the day. However, that group of wrecks that produced the 11 cautions made him one of their victims.

Trevor Bayne should be doing better than he is, based on the quality of his car. Right now, though, he’s not producing.

Justin Allgaier also could have won at Texas Motor Speedway, but a spin dashed his hopes. He did come in fourth and earn the top Rea Rating.

Ty Gibbs got dumped twice at Texas Motor Speedway. At Charlotte last year, he wrecked and went on an infield spin during Stage 1. He came all the way back to win the whole race.

Josh Berry was another driver who had a real shot in Texas, but one of the restart wrecks in Stage 3 caught him when he was pushing hard for the win.

A.J. Allmendinger was running in a sow car last week, and he still got a top-ten finish. Unfortunately, that same vehicle is with him this week, and he just can’t lead laps with this vehicle.

Sam Mayer is another key driver in that JRM team; with Allgaier, Gragson and Berry, this is a team that could produce winners each week.

Riley Herbst cracked the top ten for the sixth race in a row last week, so he continues to creep up the odds list. You can still get him while he offers significant value, though.

Bayley Currey offers value given that he has four top-25 finishes in his last five starts and five top-20 finishes overall.

Mason Massey came in 18th at Texas and 22nd at Darlington, and his contract with Mario Gosselin has improved his equipment this season.