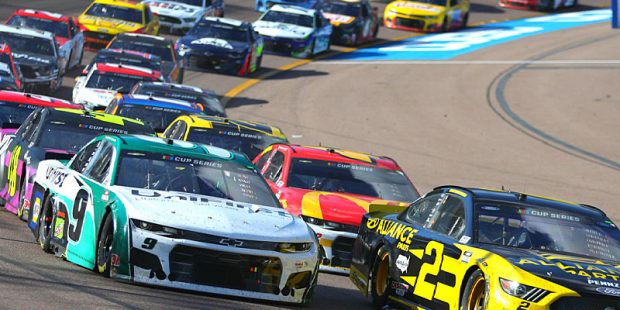 This Sunday’s installment of the NASCAR Cup Series comes from World Wide Technology Raceway in Madison, Illinois, as the Enjoy Illinois 300 presented by TicketSmarter will start at 3:30 pm Eastern time. You can watch all the action on FS1 or listen on Motor Radio Network. At last week’s Coca-Cola 600, Denny Hamlin started in front and ended up with the win despite a chaotic day of racing. It took 619.5 miles – a NASCAR record for race length – and two overtimes for Hamlin to win, beating Kyle Busch by 0.014 seconds. This is Hamlin’s second win of 2022 and the 48th of his career. He now has wins at NASCAR’s three signature races: the Daytona 500, the Coca-Cola 600 and the Southern 500. The only other active Cup Series driver who has won all three is Kevin Harvick. For a while, though, it looked like Kyle Larson was going to pull off an amazing comeback. He started from the back of the field in a repaired car. He took three pit-road penalties. He had a fire in his pit stall and went into a spin off Turn 4, but he was in the lead on the next-to-last regulation lap when Chase Briscoe went into a spin while pushing for the lead, leading to the night’s 17th caution. The first overtime led to a wreck that ended Larson’s night, shaking up the order and putting Hamlin in first – with four fresh tires. Larson ended up finishing ninth. Hamlin and Busch were neck-and-neck until Lap 412 of 413, when Hamlin pulled ahead. Busch came back but could not catch him. Check out the NASCAR betting odds for the Enjoy Illinois 300 along with our wager suggestions.

Ross Chastain has been the top driver in the Cup Series over the last month. He came in second last year at Nashville, which is a similar track, and he also won the Gateway Truck Series race in 2019 at World Wide Technologies.

Kyle Larson has had a ton of issues to deal with recently and has still almost won just about every week. Larson won at Nashville easily, and if he can stay clean, his car will push him to a win.

William Byron does well at short, flat tracks (0.89 Real Rating at Phoenix and Richmond, and a pristine 1.00 at Martinsville). The shorter tracks tend to be slower, as we have seen in prior races in Nashville.

Kyle Busch has a fast car and an elite pit crew, and at this track, pit lane is one of the only places where passing smoothly can take place.

Denny Hamlin emerged from a real mess to win last week despite not having the best car, but that’s the way NASCAR goes.

Martin Truex Jr dominated Richmond’s flat track and also was a contender in the last race with high horsepower in Kentucky. It will be interesting to see if Truex can develop a comfort level at this track.

Chase Elliott does well on the ovals, and we have an oval this week. He had 29 hog points (fast laps and points for laps led) at Phoenix, 77 at Martinsville and 33 at Charlotte and Dover combined.