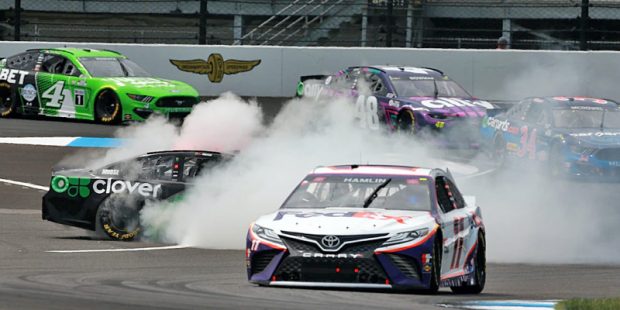 NASCAR heads northeast to Charlotte Motor Speedway for this weekend’s series of races, which will come to a climax in the Coca-Cola 600 on Sunday, with the race set to start at 6:00 pm Eastern time. The telecast will be on FOX, and you can also listen on SiriusXM. Last week, Ryan Blaney won the All-Star Race at Texas Motor Speedway, beating Denny Hamlin by 0.266 seconds in overtime. This is Blaney’s first All-Star Race victory. He actually finished first twice, as a caution went up when he was just yards away from the win. Blaney barely had time to reattach his window safety net and get back to driving, but he was able to get the official win as well. Hamlin was upset that NASCAR granted additional laps under caution so Blaney could put his net back in place, but Blaney led 84 laps and won Stage 3, so he was a deserving overall winner as well. What will happen this week in Charlotte? Check out our wagering suggestions and the NASCAR betting odds.


Kyle Larson returns as the defending champion, but he’s in a New Gen car this time. He has done well on other intermediate tracks, with second-place finishes at Las Vegas and Kansas, so there’s no reason to think he won’t be right there at the end this time.

Kyle Busch took the most fantasy points at Las Vegas and the second-most at Kansas – the first two intermediate-track (1.5 miles) races on the season.

Martin Truex Jr absolutely dominated this race during the low-downforce, high-horsepower era. The Next Gen car gets back near that tradition but not al the way. Even so, Truex is very familiar with this track and could win.

William Byron had an elite car at Kansas but came in 16th after a flat tire on Lap 112, which sent him from the front to 29th place.

Ross Chastain had some problems in the pits at Kansas. His car has top-ten speed, but we don’t know yet if it has the speed he will need to win on Sunday.

Denny Hamlin has the sort of car that can win this race. At Kansas, he had to start from the rear, and the pit crew caused some adventures. He will do much better at Charlotte.

Chase Elliott got sidelined at Kansas thanks to a blowout. Even so, he has posted the second-best Real Rating in the Cup Series.

Alex Bowman won at Dover in 2021, and he came in fifth there a month ago. The Dover and Charlotte setups have been similar in prior racing packages, so it could work out the same way for him this week.

Ryan Blaney has to be wondering what happened to the speed after a strong start to the season but a disappointing result in Kansas, as the competition appears to have caught up to him.

Kurt Busch won at Kansas and teammate Bubba Wallace came in tenth at Kansas, so the intermediate-track layout may favor them again this week.

Tyler Reddick had tough luck with his tires at Kansas, and the conditions at Charlotte on Memorial Day weekend have historically been tough for tires. Reddick has also seen tires fail at other races this year, so can he go a full 400 laps?