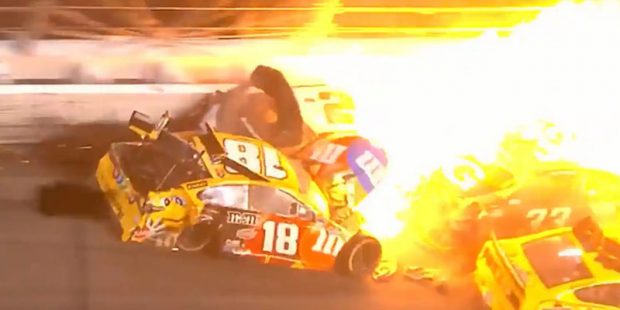 After a week off, the NASCAR Cup Series returns with the Ally 400, set for Nashville Superspeedway on Sunday afternoon. The action begins at 5:00 pm Eastern time, and you can catch the television broadcast on NBC, with the radio call on MRN and Sirius XM. On June 12, Daniel Suarez was the winner at the Toyota / Save Mart 350, picking up his first win in the Cup Series and the first win by a Mexican-born driver in the history of the series. He pulled awawy from Chris Buescher down the stretch to win by 3.849 seconds on the 1.99-mile road course at Sonoma. All of the top four finishers were looking for their first Cup Series win of the year, showing the parity at work in this sport right now. Behind Buescher came Michael McDoweel in third and Kevin Harvick in fourth. Austin Cindric, leading the race for Sunoco Rookie of the eyar, came in fifth. It looked like Chase Elliott and Kyle Larson would dominate the race, but Elliott pitted outside his box and took a penalty that pushed him back to 34th. He did rally to come in eighth, but the error was crucial. Larson had won pole position as well as Stage 1, but he had a right front wheel come off going into Turn 2 just after a pit stop. He did recover to finish 15th, but his team faces a four-race suspension for his crew chief, tire changer and jackman. Who will prevail in Nashville? Check out the NASCAR betting odds for the drivers and our wagering suggestions.


Kyle Larson won the first Cup Series race at Nashville Superspeedway, leading 88% of the laps. He has not won a lot lately, but he still has a fast car. He’s the favorite for a reason, and he’s a smart pick.

Ryan Blaney had the top car at Gateway, and he won $1 million at the All-Star Race at Texas Motor Speedway. Both of those venues have similarities with the track in Nashville, as Gateway is flat on both sides, and Texas has flat turns at 1 and 2.

Ross Chastain came in second last year at Nashville Superspeedway, but that’s a little problematic, as he had a tire advantage on the final run. That could mean that it was a fluke, but at the time he just had a top-ten car and the team was still coming together. The team runs strong together now, so he should be right there at the end again.

Kyle Busch posted a perfect Real Rating of 1.00 at Gateway; this is a statistic that measures the driving performance in a race. He lost the intermediate track races before Gateway also, but he had two Real Ratings higher than 0.90 in those four events.

Martin Truex Jr is fast, but is he fast enough? He also needs to get a break, which has not happened for him yet in 2022. He needs to get out of the gate quickly and then get as many breaks going his way as possible.

Joey Logano has picked up wins at two intermediate tracks that aver very different (Darlington and Gateway), and Team Penske has been hot for the last two months, so it could be Logano’s turn to draw the checkered flag.

Denny Hamlin has a fast car, but he wins races he shouldn’t and also loses when he shouldn’t. Pit road needs to go well, and his car needs to stay together. If those happen, then he will turn into a smart pick.

Daniel Suarez won at a road course, but can he win at an intermediate track? He had 32 hog points at Charlotte for laps led points and fast laps. He has a fast car, and he has momentum and confidence.