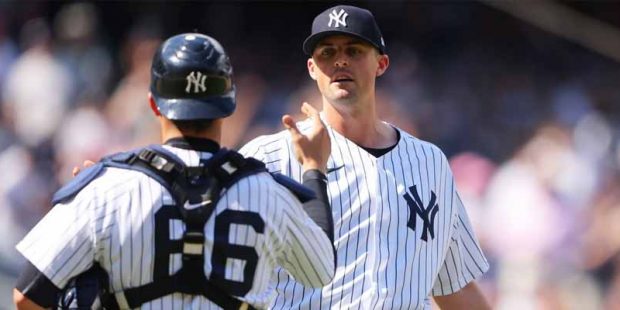 We are eight days away from the 2022 MLB All-Star Game, and with yesterday’s release of the complete rosters for each team, a popular topic is the players who got snubbed. Because each of the 30 teams is guaranteed one All-Star (and because there are so many elite players), each year there are some players who are deserving in some ways but still end up on the outside looking in. One example is Ty France, the Seattle Mariners’ first baseman. He was a finalist to get a starting slot but came in second behind Toronto’s Vladimir Guerrero Jr in fan voting. He is the top first baseman in the American League in OPS (.851) and batting average (.310). Seattle will instead send outstanding rookie Julio Rodriguez.

As we move toward the midpoint of the season, let’s look at the sports betting odds for each team to win the World Series as well as some thoughts about some of the top teams.


The only problem that the New York Yankees have right now is the .167 batting average that Joey Gallo has posted so far this season. That would be the lowest qualified batting average during MLB’s expansion era ever if it holds, as the record is the .168 number that Chris Davis posted in .168. With runners in scoring position, Gallo is hitting .just .149, and in “late and close” at-bats, his average is a microscopic .032. The Yankees could let Giancarlo Stanton play in right field more often and put Matt Carpenter at DH against right-handed pitchers, and they could also make a trade for depth in the outfield.

The Houston Astros are firing on all cylinders as well. Yordan Alvarez is putting up numbers that would make him a shoo-in MVP if it weren’t for the phenomenon known as Shohei Ohtani. Alex Bregman’s bat has woken up after a slow start, and Justin Verlander continues to turn back the clock on the mound. Down the stretch, Houston has 43 home games, the second-most of any team, and they have the second-easiest schedule of remaining opponents, so they could swoop in and pass the Yankees for the best record in the American League, which would give them home-field advantage in any playoff series.

The Los Angeles Dodgers have won 12 of 16 but have some gaps with the trade deadline looming. Chris Taylor has a fracture in his left foot that will sideline him for an undetermined amount of time. Daniel Hudson and Blake Treinen are out, leaving them with gaps in the bullpen, and Walker Buehler’s absence means the team could use a starting pitcher. Their top hitters have been inconsistent here and there, and there are some injury concerns. They’re still the top favorite out of the senior circuit, though.

The New York Mets got Max Scherzer back in the rotation, and he threw six scoreless innings, throwing 79 pitches and notching a season-best 11 strikeouts against the Cincinnati Reds. He hit 97.1 mph with his fastball, tying a season best. The Mets lost the game, 1-0, but his performance was a needed boost for a rotation that had put up a 4.92 ERA, 23rd in the majors, since May 18, when Scherzer got injured. Jacob deGrom will be back soon; in his rehab start on Sunday, he faced six hitters, striking out five and hitting 100 on the radar gun.