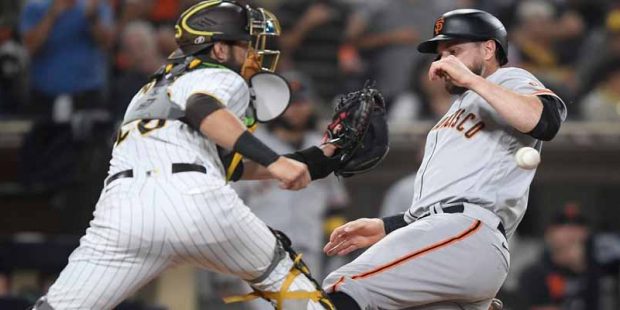 Los Angeles Angels star Shohei Ohtani continues to dominate on the mound, as he now has a streak of 28 ⅔ innings without permitting an earned run. He last pitched on Wednesday against the Miami Marlins, permitting one unearned run but also striking out 10 in a 5-2 win. In the last 50 years, this makes the third-longest streak by an Angels starting pitcher. He has at least 10 strikeouts in each of his last three starts. When Ohtani starts on the mound, the Angels are 5-1 since June 1. Unfortunately, they are 6-21 when any other pitcher starts the game, which is why the team is on its second manager of the season after coming into 2022 with high expectations.

Let’s look to the weekend as you consider which series is the best for your MLB sports betting.

Logan Webb has pitched well for the Giants in recent games, even though the team has only won two of his last five starts. In those two wins, Webb threw 13 innings without permitting an earned run, scattering seven hits while striking out 15. In a 2-1 loss to Atlanta on June 20, he threw seven innings of six-hit, one-run ball, permitting just a solo home run. His last start, on July 2 against the White Sox, saw him last six innings, permitting five runs (three earned) on six hits, striking out five and walking one.

The Padres have lost the last two games Joe Musgrove has started, a 6-2 home loss to Philadelphia and a 3-1 loss in Los Angeles against the Dodgers. He threw 13 combined innings in those games, permitting nine runs on 12 hits, striking out 11 but permitting four home runs. In his three starts combined before those, he had only permitted one home run – and just two earned runs combined. He faces a Giants offense that is not quite as strong as the Phillies’ or the Dodgers’ here.

Expect the Giants to come with a spot starter here, which might not be a bad idea given how many runs Snell has been giving up lately. In four starts in June, he permitted 14 earned runs over 20 ⅓ innings, never striking out more than seven in a game, and only making it through six innings one time. He did look sharper his last time out, striking out a dozen in five innings against the Dodgers up in L.A., but the bullpen let him down in a 5-1 loss. If Snell has his good stuff again, the Giants have a better chance.

Carlos Rodon finished June with four starts that saw him throw a combined 27 innings, permitting just two earned runs, as the Giants won three of those games. His last start was rougher, as he gave up four earned runs on five hits in an 8-3 loss to Arizona, although he did strike out seven hitters. Was that a blip on the screen? His 2.87 ERA for the season seems to suggest that it was.

Yu Darvish has seen his ERA creep higher over his last two starts. He threw 12 combined innings in losses to the Phillies and the Dodgers, giving up eight earned runs on 15 hits. Against the Dodgers, he was tagged for three home runs despite striking out 10. Before those starts, he had thrown 22 combined innings in three starts against the Mets, Cubs and Diamondbacks, permitting just two earned runs in that stretch while striking out 18. That two-game sample is worrisome, given Darvish’s tendency to find too much of the plate for lengthy stretches.

Alex Wood had a solid outing in Arizona on July 5, throwing five innings of four-hit, one-run ball, striking out four without a walk. Unfortunately, the bullpen and the offense let him down, as the Diamondbacks erupted for a 6-2 win. That was an improvement from Wood’s three prior innings, which he gave up 13 earned runs on 17 hits over 11 ⅔ combined innings – including an outing in Atlanta where he was yanked after giving up six runs in the first.

MacKenzie Gore has turned things around after a horrendous pair of starts against Colorado in early June, when he gave up 14 earned runs on 14 hits, including three home runs, over just 6 ⅓ combined innings. Since then, he has beaten Philadelphia and the Dodgers, throwing 10 ⅔ combined innings in those games while permitting just one earned run on eight hits.