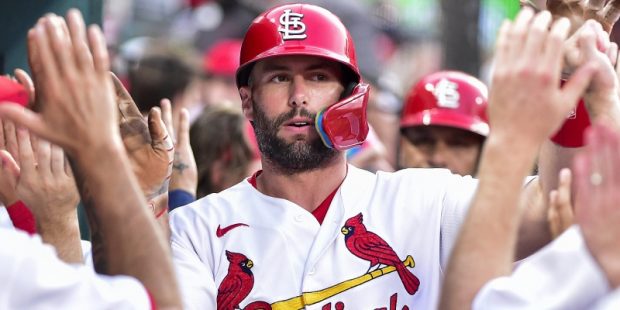 When hitters start to approach their mid-30s, their numbers start to tail off. Whether it’s an infinitesimal slip in hand-eye coordination or the loss of a step or two in speed on the bases, unless we’re talking about a pure power hitter along the lines of Cecil Fielder or Rob Deer, the age of 33 or 34 is usually the last top season in a hitter’s career. St. Louis Cardinals first baseman Paul Goldschmidt looks to become an exception; at the age of 34, if he can keep his numbers up, he could be the oldest MVP outside the steroid years since Mike Schmidt won it with Philadelphia in 1986. Read on for more stories that could influence your MLB betting choices on the national pastime.

Are the San Diego Padres going to have another year ruined by the injury bug? Manny Machado was running to first base on Sunday in a game against the Colorado Rockies, as he hustled down the line, extended his foot to the bag, but then had his foot slip off the bag. His leg buckled and he fell down just past first. The team trainers came out to help him get up, but he could not put any weight on that left leg. He was helped off the field, and Sergio Alcantara replaced him at third and in the lineup. Fortunately, X-rays were negative, and the injury was just an ankle sprain, so hopefully his absence from the lineup will be as short as possible.

New York Mets starter Max Scherzer starts his rehab assignment on Tuesday with Double-A Binghamton. The goal is to go three or four innings, throwing 45-60 pitches. James McCann will catch the game as he rehabs his hand. Hopefully, Scherzer will only need the single start, but the trainers will evaluate how his oblique reacts after the game. If he can come back after one rehab start, he would pitch in Miami on Sunday. Originally, his return timeline was six to eight weeks from May 19, but if he returns Sunday, he will have made it back in just 5 ½ weeks.

The Pittsburgh Pirates are bringing up their #1 prospect for a visit from the Chicago Cubs. Shortstop Oneil Cruz made a brief debut in the big leagues last year, playing two games. He went 3 for 9 with three RBI and a home run, striking out four times, but this time around he should get a longer stay with the big club. He is ranked #22 among baseball prospects by MLB Pipeline. sTanding 6’7”, he would be MLB’s tallest shortstop. He has hit .233 with nine home runs and 11 steals in 54 games at Triple A.

Speaking of rookie sensations, the Miami Marlins got a terrific debut from Jerar Encarnacion. He made his debut on Sunday and came to the plate with the bases loaded in the seventh inning, with Miami trailing the Mets, 1-0. Encarnacion took a ball the other way, hitting a liner over the right field fence for his very first hit, his first home run – and his first grand slam. The Marlins would go on to win, 6-2, and Encarnacion got his first stolen base and scored another run in the ninth inning.

The Dodgers are about to have their depth tested, as Mookie Betts will go to the injured list indefinitely after undergoing an MRI that showed a cracked rib. He had missed two straight starts because of a rib contusion; the injury happened on Wednesday, when Betts collided with outfielder Cody Bellinger in the first inning of a 4-1 victory over the Angels. Betts stayed in the game but went 0 for 4 at the plate. Betts has struggled in June, hitting just .193 with 11 hits, two home runs and seven RBI in 57 plate appearances. For now, he has no timetable to return.