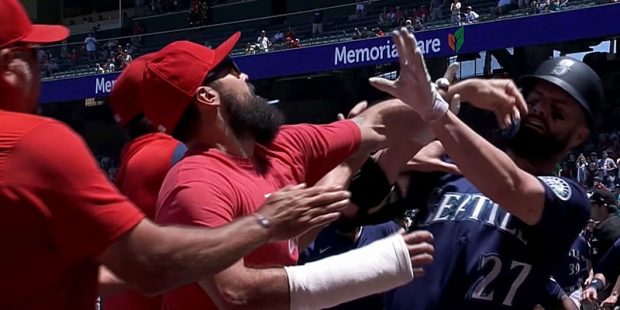 The Seattle Mariners and the Los Angeles Angels met eight times in the last week and a half, and tensions got out of hand on Sunday, as two days of inside pitches turned into a brawl in the second inning. Both managers were ejected, along with six players: Jesse Winker, Julio Rodriguez and J.P. Crawford, the 1-2-3 batters in the Seattle lineup. The Angels lost closer Raisel Iglesias, Andrew Wantz and Ryan Tepera, all pitchers. Wantz threw a pitch behind Julio Rodriguez in the first inning and hit Winker to start the second. The league will certainly investigate this further, with suspensions likely to come. Want more baseball news that could influence MLB online betting? Read on.

The Houston Astros and the New York Yankees played an intriguing series over the weekend in the Bronx. Houston no-hit the Bronx Bombers on Saturday and almost did it again on Sunday. New York had gone 0 for 52 from the eighth inning of a 3-1 loss on Friday through midway through the seventh inning on Sunday, a 16 ⅓–inning drought that was the longest since at least 1961. No team has ever been no-hit in two consecutive games. However, Giancarlo Stanton hit a solo shot in the seventh inning on Sunday to make it a 3-1 deficit, and D.J. LeMahieu tied the game at 3-3 with a two-run shot in the eighth. Then Aaron Judge hit a three-run home run in the tenth to make it two walk-off hits in four games against Houston. The Yankees now have 10 walkoff wins this season (with three coming on hits by Judge) and are now 53-20, matching the third-best record through 73 games since 1930. The Yankees are 24-1 when Stanton and Judge homer in the same game, including an 8-0 mark in 2022. But the way Houston was able to shut down their hitters for extended stretches over the weekend has to concern manager Aaron Boone.

The Astros did get rookie shortstop Jeremy Pena back from the injured list on Sunday, but they lost star outfielder Michael Brantley, who had to come out of the game with discomfort in his right shoulder. Yordan Alvarez has dealt with a hand issue since June 18, when he hurt his hand swinging the bat against the White Sox. However, he has played every game since. His hand remains sore, though, and manager Dusty Baker said that Alvarez may need occasional rest. Even so, he has hit four home runs in his last five games, so the real concern for the Astros right now seems to be Brantley.

Philadelphia Phillies outfielder Bryce Harper took a 97 mph fastball from San Diego Padres pitcher Blake Snell off the left thumb on Saturday, and he is now out indefinitely with a break in that digit. He checked his swing as the fastball tailed high and inside, but he could not avoid the pitch. He went on the 10-day injured list, and Mickey Moniak came up from Triple-A Lehigh Valley, but Harper does not have a timetable for a return. Johan Camargo replaced Harper in the game, and the Phillies went on to win, 4-2. Harper has a .318 batting average with 15 home runs, 48 RBI and a .985 OPS in 64 games. He has a tear in the UCL on his right elbow that has limited him to DH duties since April 16, but he has tried to work through the season without Tommy John surgery. It will be interesting to see how the Phillies decide to handle his health now.

The Atlanta Braves got another scare with Ronald Acuna Jr on Saturday night, as he fouled a ball off his left foot in a 5-3 loss to the L.A. Dodgers. He did not play Sunday, using a medical scooter to elevate his foot, as the star outfielder indicated that he could not place pressure on his foot. Tests have shown that there is no fracture, though, and he was not wearing a protective boot. Hopefully the pain subsides soon, and he can get back to slugging baseballs.