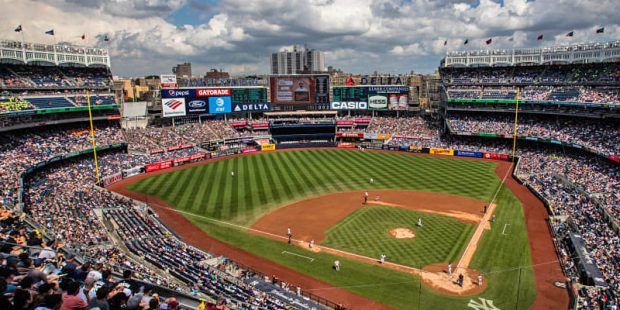 The New York Yankees made the first big move ahead of the trade deadline, snagging All-Star Andrew Benintendi from Kansas City. In exchange, the Pinstripes are shipping three pitching prospects from the minors west: lefty T.J. Sikkema and righties Chandler Champlain and Beck Way. Benintendi was named an All-Star for the first time this year; as of this writing, he has a career-high .320 batting average with three home runs, 39 RBI and a .788 OPS in 933 games. He is eligible for free agency at the end of the season, but the rental might be worth it for the Yankees, who want an outfield option to join Aaron Hicks and Aaron Judge, now that Giancarlo Stanton is out for at least two weeks after joining the injured list with Achilles tendonitis. Joey Gallo is hitting a woeful .161, with 103 strikeouts in 230 at-bats – and is drawing boos at Yankee Stadium. Matt Carpenter, 36, has made appearances in the outfield for the first time in eight seasons, so it was time for the Yankees to add an option. Looking ahead to this weekend, we have some straight up online betting picks for you to check out.

The Orioles have come on strong this season, pushing toward wild card contention a year or two ahead of projections. They have finally climbed out of the basement of the American League East, a half-game ahead of Boston and just four games out of the second wild card position. They have taken two games out of three at home from the Tampa Bay Rays (who are in a tie for the second wild card) with the fourth game coming Thursday. They face a Cincinnati Reds team that has the second-worst record in the National League. Mike Minor will start for the Reds, but this has not been a good season for him at all, as he has a 1-7 record with a 6.65 ERA. In his last three starts, he has given up 14 runs (10 earned) on 18 hits, including three home runs, while issuing nine walks and striking out 17 over 14 ⅓ combined innings. The Orioles should be able to get this weekend series off to a winning start. Orioles to win.

The Seattle Mariners shrugged off a rough patch after their 14-game winning streak and now have won three more in a row. They have an interesting weekend series in Houston this weekend against the American League West-leading Astros, who are 10 games ahead of the Mariners. However, three days ago, the lead was 13. The Astros will hope that Justin Verlander (13-3, 1.86 ERA) can replicate his mastery of the Mariners; on Saturday, he threw seven innings of four-hit, one-run ball, striking out nine while walking two. The Mariners counter with Robbie Ray, who the Astros pounded on Sunday for six runs on ten hits, including a pair of home runs, on just three innings, en route to an 8-5 win. I expect the Astros to put up more runs on Ray on Friday. Astros to win.

The Rangers have a solid offense, keyed by the additions of Ryan Seager and Marcus Semien in the off-season but bolstered by such hitters as Kole Kalhoun, Adolis Garcia and Jonah Heim. The starting pitching has been decent, but the bullpen has been atrocious, as the team has blown lead after lead. However, Patrick Sandoval has been lit up for nine earned runs on 16 hits over 7 ⅔ innings in his last two starts, big losses to the Dodgers and the Braves. The Rangers counter with Martin Perez, who permitted just one earned run in each of his last two starts. The bullpen gave away a 6-5 loss to Seattle in his last start before the All-Star break, and he threw a perfect inning in the All-Star Game before coming out of the break with seven innings of four-hit, one-run ball, striking out six, in a game that Texas led, 11-1, before the bullpen made things interesting and the Rangers held on with white knuckles, winning 11-8. Perez’s start represents the Rangers’ best chance to win a game in this series out west. Rangers to win.