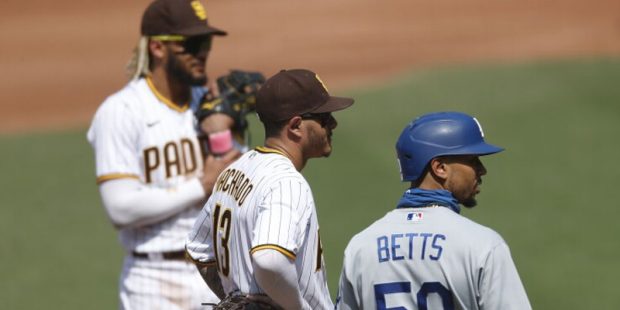 It is clear that the San Francisco Giants’ rivalry with the Los Angeles Dodgers is not nearly as close as it was last year, when the Giants edged out the Dodgers to win the National League West by a game – but the Dodgers then eliminated the Giants in the National League Division Series. This time around, the Dodgers lead the division, while the Giants are hanging around hoping to contend for a wild card – and the Dodgers just widened their lead by completing a four-game sweep of the Giants in San Francisco for the first time since 1977. In the series finale, though, Dodgers hurler Clayton Kershaw had to leave before the bottom of the fifth inning, feeling lower back discomfort. He finished with 66 pitches in four innings, permitting one earned run and departing with a 4-2 lead. Kershaw has already spent time on the injured list this year with inflammation in a pelvic joint, so we will see how long he has to miss this time. Going into the weekend, don’t miss our weekly MLB betting suggestion for the top series for you to follow.

Sean Manaea has been leaving balls over the plate lately, giving up at least one home run in five straight starts, and four combined over his last two. Sometimes that doesn’t doom him, as in his last start, when he went six innings, permitting just two runs on solo shots among four hits while striking out seven and walking three, but sometimes things get out of hand, as they did in Detroit on July 25, when he permitted nine runs (four earned) on eight hits, including two home runs, in a 12-4 clobbering. The Dodger bats won’t allow Manaea too many mistakes.

Tony Gonsolin’s ERA has been climbing steadily since the calendar flipped to July. In his last starts, he has given up 12 combined runs over 16 innings, permitting three home runs among 18 hits, striking out 16 and walking five. In the All-Star Game, he got torched for three runs on four hits, including two home runs. The Dodger offense bailed him out in two of his last three starts, as L.A. beat the Cardinals and the Rockies, but he took a 4-1 loss against Washington on July 25. Take the “over” in this game, no matter which team you like, but I’m taking the team batting last.

Mike Clevinger has improved since the All-Star break, holding Detroit and Colorado to three earned runs in 14 combined innings, striking out 11 and walking just one. The Tigers and Rockies don’t have all-world offenses, to be sure, but those numbers show that Clevinger may be working himself back toward his former Cy Young self.

Andrew Heaney has faced some strict pitch counts since returning from the injured list, but the Dodgers have rolled in both of his outings this time back. He threw four innings each against Washington and San Francisco, permitting one run on five hits, striking out 11. The walk total (5) is a bit high, but other than that, he has managed to get things done. But can the Dodger bullpen hold off that Padre offense?

Yu Darvish has been getting plenty of strikeouts as he keeps notching quality starts. In his last three outings, he has thrown 20 combined innings against the Mets, Tigers and Rockies, striking out 27 while walking just four. He did permit two home runs among six hits (and three earned runs) against Colorado his last time out, but the offense supported him handsomely with 13 runs.

Tyler Anderson has been feast or famine over the last month after a dominating start to 2022. Since July 8, he has started five games; against the Cubs and Giants (which was his last start), he permitted eight runs on 11 hits, including two home runs, over 12 combined innings, striking out seven and walking four. In the other three starts, he led the Cardinals, Giants and Rockies without an earned run, scattering 11 hits over 19 innings, striking out 14 while walking four. Which Tyler Anderson will show up on Sunday? I think he can outduel Darvish.