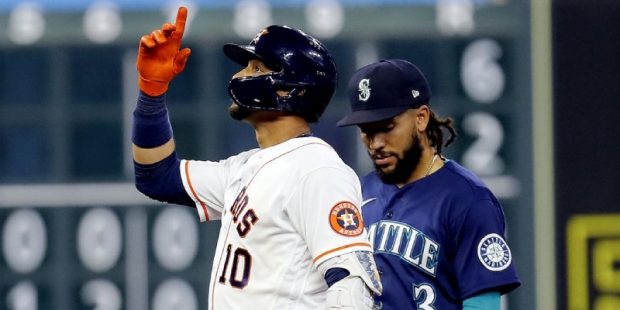 On June 26, the Seattle Mariners and the L.A. Angels had a bench-clearing brawl that led to a dozen suspensions, including 10 games for Phil Nevin, the Angels’ manager. So many Mariners were suspended that the sentences were staggered so that the team could field a major league squad. Since then, though, the Mariners have gone 17-3, going from seven games out of the second wild-card position to snagging that wild card for themselves. Some say that the brawl fired the team up, but the M’s actually won five straight before the brawl. That gives them a 22-3 record from June 21 until the All-Star break, the best 25-game record for any MLB team since 2017, when Cleveland ran off 22 wins in a row. What teams are ready for a solid start out of the All-Star break? Check out our top sports betting series for this weekend.

Jose Urquidy has started to get hit harder the last couple of starts. In two outings against Oakland, he gave up six earned runs on 10 hits over 14 ⅓ combined innings, striking out 11 while walking just one. The Seattle bats have been opportunistic, but so have the Astros’. This could be a game that hits the over, though.

Gonzalez got tagged for five runs on 11 hits over six innings against Texas last Thursday, but the Mariners were able to prevail, 6-5. Before that, though, he had not permitted more than two earned runs in four straight starts, and he finished at least six innings in every outing. If Gonzalez’s last start is a blip, then the Mariners should be able to get to the bullpen with a lead.

Justin Verlander continues to show an ageless arm. In his last three starts, he has permitted one earned run on 15 hits combined over 20 innings. His last start, against Oakland, was a six-inning, six-hit scoreless gem in which he struck out 10 without issuing a walk. That sort of stuff will be hard for any offense to tag.

The Mariners counter with their own ace here, although Gilbert’s last four starts have been feast or famine. In home starts against Oakland and Toronto, he threw 12 combined innings, permitting 8 earned runs on 17 hits, including four home runs. In road starts against San Diego and Texas, he has thrown 10 ⅓ combined innings of 10-hit, two-earned run ball. Which version of Gibert do we get on Saturday? I think he comes out motivated with Verlander starting for Houston, but that might not be enough.

Framber Valdez makes his first appearance since a perfect inning in the All-Star GAme on Tuesday. In his three starts before the break, Valdez went at least six innings each time, permitting two earned runs in each game, including a 13-strikeout performance against the Angels on July 3. So while Valdez has been hittable, he has been controlling the damage.

Robbie Ray gave up three earned runs on six hits, including a pair of home runs, in an 8-3 win over Texas on July 15, a game in which he struck out a dozen. Before that, he had gone four straight starts without permitting more than one earned run. With somewhat similar pitching lines recently, I like the Mariners to win a bullpen battle late.