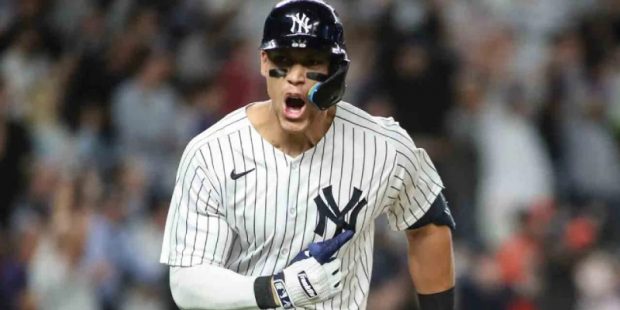 Yesterday, Aaron Judge slugged his 54th home run of the year. Along with his .302 batting average an 117 RBI, Judge is part of this season’s AL MVP conversation and is a major reason why the Yankees are one o the top teams in the league. If Judge hits eight more, he would break Roger Maris’ franchise record of 61 home runs, set back in 1961, a mark that is still the American League record as well. Now, let’s look at our weekly update about each team’s MLB betting odds to win the World Series, as well as new information about some of the top clubs.

One player flying under the radar for the L.A. Dodgers is Mookie Betts. During August, he put up a 1.081 OPS, and he has 11 extra-base hits in his last 12 games. As of Wednesday, he had 32 home runs, tied for his career best. Hitting leadoff, he has gotten the offense going over and over again, posting a 6.4 fWAR for the season, third in the NL behind just Paul Goldschmidt and Nolan Arenado.

One problem brewing for the N.Y. Mets is their bullpen, which relies heavily on Edwin Diaz. Manager Buck Showalter has adjusted his approach as a result, using Diaz in the eighth inning when the opponent has the heart of the order up, moving to a different pitcher for the ninth, when hitters down the order are coming up. Adam Ottavino has been decent this season, but Mychal Givens and Trevor May have struggled, and Seth Lugo permits an OPS over 1.000 when pitching without a day of rest; in the postseason, rest becomes a lot harder to come by.

The Houston Astros saw Justin Verlander head to the injured list, as he strained a calf while covering first base in the middle of a rundown. The injury does not look all that serious, but Verlander could miss out on his third 20-win campaign. For now, the Astros have filled Verlander’s rotation spot with Hunter Brown, up from Triple-A, where he had a 9-4 record, a 2.55 ERA and 11.4 strikeouts per nine innings.

Since the All-Star break, the Atlanta Braves have gotten outstanding work out of their rotation, with an ERA of 3.15 and a strikeout-to-walk ratio of 4.13. Those numbers were 3.92 and 2.66 before the break. Charlie Morton’s ERA was 4.45 before the break; since then, it has been 3.23, with 54 strikeouts in 41 innings, including 23 combined strikeouts against the Mets and Astros. Max Fried has issued just five walks in his last seven starts.

The N.Y. Yankees rattled off a five-game winning streak, but then they ended up splitting a four-game set with Oakland after winning the first two. Aroldis Chapman is on the injured list. Why? Because he got a tattoo that infected his leg. Frankie Montas is not adjusting well to life in Gotham, putting up an unsightly 7.01 ERA in his first 25 innings pitched with the team. Without Judge’s bright spot, we might be hearing more about the cracks forming under this team’s World Series hopes.

The Philadelphia Phillies have Bryce Harper back, but now Zack Wheeler is on the injured list with forearm tendinitis and will miss at least two starts. Aaron Nola continues to be feast or famine; in his last nine starts, he has permitted zero or one run five times – and at least five runs four times.