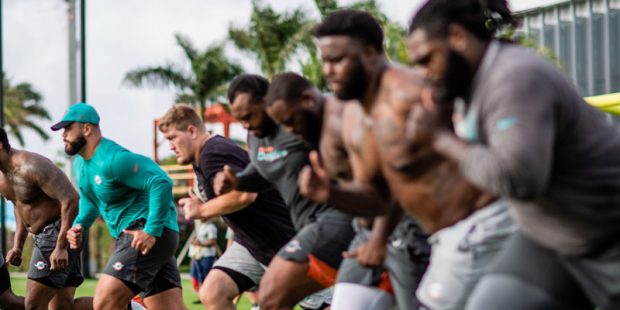 The Miami Dolphins have done their best to leverage the possibility of Tua Tagovailoa struggling to move the ball at quarterback. The tailback corps is deep and talented: Sony Michel, Chase Edmonds, Myles Gaskin and Raheem Mostert. Tyreek Hill brings unmatched speed at receiver, and Jaylen Waddle can juke coverages on the other side of the formation. Connor Williams and Terron Armstead join the offensive line, and the defense has improved as well. Xavien oward, Jevon Holland and Byron Jones return to lead the secondary, and Jaelan Phillips could cause havoc rushing off the edge. If you’re planning to include the Dolphins in your NFL betting this fall, here are the matchups we like the most.

NFL News: Must-Bet Games in 2022 for the Miami Dolphins

These two teams met in Week 2 a year ago down in Florida, and the Bills rolled to a 35-0 shellacking. The Dolphins should be better on defense than they were a year ago, but the Bills should come into 2022 even more dialed-in than they were a year ago, as they have improved on both sides of the ball. I wouldn’t predict a shutout, and I wouldn’t predict a 35-point win, but I think the Bills win this one handily. Bills to win straight up and cover.

The Bengals added pieces to their secondary and defensive line, and their offensive line will be better as well. At the offensive skill positions, everyone is back for the defending AFC champions, who should be back in form by Week 4. The Dolphins will be heading to Cincinnati after the disappointment of a home loss to Buffalo the week before, but I’m not sure the Dolphins are built to keep up with the Bengals yet on either side of the ball. Bengals to win straight up and cover.

Some books have this at Miami -3.5, and I’m confident in them at either point on the spread. The offense should be able to pound the ball on the ground, and while the Lions are improved on defense, their offense will not be able to push Miami’s defense around enoug to take the home win. Dolphins to win straight up and cover.

If you think Trevor Lawrence had a bad deal last season with the Jacksonville Jaguars, then the deal that Justin Fields has as the team around him is lacking in NFL-quality talent. The running backs, wide receivers, linemen (on both sides) and defensive backfield all need help, which means that Fields will likely not get much time on the field. The Dolphins will have coalesced well enough to beat a team like this on the road. Dolphins to win straight up and cover.

How on earth are the Packers only favored to win this game by a single point? With Allen Lazard and Randall Cobb running routes, Aaron Rodgers should have the personnel to zip down the field, and Aaron Jones and A.J. Dillon are a pair of bruising backs who can keep the ball moving. The Packers’ defense is the question mark, especially in the secondary, but I’m not sure Tua has what it takes to outduel Rodgers here. Packers to win straight up and cover.

Mac Jones is supposedly miles ahead of where he was a year ago, and the Patriots have brought in some solid pieces on defense. The tailback situation is not ideal, but Bill Belichick should be able to cobble together a defensive scheme that can frustrate Tagovailoa and the other offensive skill positions. Pats to win straight up and cover.