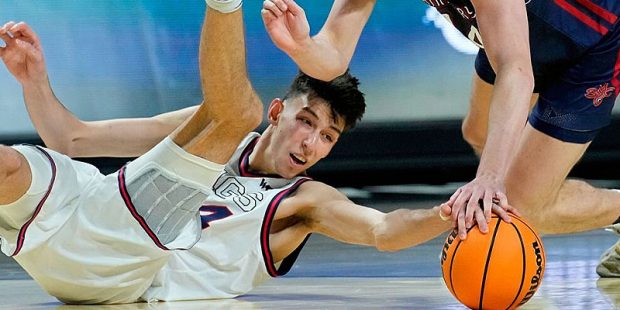 March Madness lived up to its nickname in the first week of action, as a field of 68 teams chasing the NCAA men’s basketball championship was reduced to 16. In the West regional, the top four seeds all advanced, but that was the only regional that was that happen. The East already lost its top two seeds, as Baylor lost to North Carolina and Kentucky lost to St. Peter’s, just the third 15-seed ever to make it to the Sweet 16. The Midwest has also lost two of its top four seeds, with one regional semifinal featuring a 10-seed (Miami) against an 11-seed (Iowa State). As you look to the Sweet 16, we have some advice on the underdogs you should pick in your March Madness betting.

We’ve already seen Gonzaga pushed to the limit – and by a non-Power 5 school, no less. Memphis, a 9-seed out of the American Athletic Conference, almost knocked off the tournament’s top seed, as the Bulldogs narrowly prevailed, 82-78, in the second round. This might have been Gonzaga’s wake-up call, but it also might be another sign that spending two months against West Coast Conference opposition isn’t the tournament preparation that Gonzaga needs. Guards Andrew Nembhard and Rasir Bolton combined for 40 points against Memphis, but can they replicate that against the Razorbacks?

Arkansas has an elite defense that held New Mexico State to just 48 points, and if that defense can clamp down on the Gonzaga backcourt and hold their own in the paint against Drew Timme and Chet Holgren, then the Razorbacks could not only cover but could send Gonzaga home. J.D. Notae leads the team in scoring and put up 35 points in the Razorbacks’ first two wins combined.

Texas Tech has maintained their ferocious defense after transitioning from head coach Chris Beard to Mark Adams, and that defense was on display in their 59-53 win over Notre Dame in the second round. Forward Bryson Williams, a transfer from Texas-El Paso, is a gritty, tough player who can pound the ball down low and also defend the rim.

Duke has big problems on defense, with the exception of shot-blocker Mark Williams. The Blue Devils can score in bunches, thanks to such stars as Paolo Banchero, but when the shots stop falling, the Blue Devils can’t get stops. We saw this against North Carolina in their regular season finale and against Virginia Tech in the ACC Tournament championship. I’m going with Tech to cover here.

Since February 16, North Carolina has won eight of their last nine, and they just took down #1 seed Baylor in overtime (although the Tar Heels almost blew it, seeing a 20+ point lead get erased and having to win in overtime). Armando Bacot patrolled the lane, and Brady Manek was knocking down three-balls left and right.

UCLA beat Akron and Saint Mary’s (CA) in the first two rounds. The question is Jaime Jaquez, who suffered a lower-body injury in the win over Saint Mary’s. Wing Johnny Juzang can shoot lights out, but if Jaquez is out, or is limited, that could allow the Tar Heels to load up on Juzang and dare the rest of the Bruins to beat them. I like the Tar Heels here – if they end up on the underdog side of the spread.

This is an underdog that I would only consider covering, not taking straight up, and I wouldn’t put a ton of money on them. The Peacocks were 18 ½-point underdogs in their win over Kentucky and eight-point underdogs in their win over Murray State. Next up is Purdue, a team that scores tons of points behind shooting guard Jaden Ivey and big men Zach Edey and Trevion Williams. The biggest question for Purdue is their defense, as they have been scorched at times. St. Peter’s would become the first 15-seed ever to get to the Elite Eight with a win, but you have to wonder if the days between the second and third rounds will see the Peacocks settle back to earth.