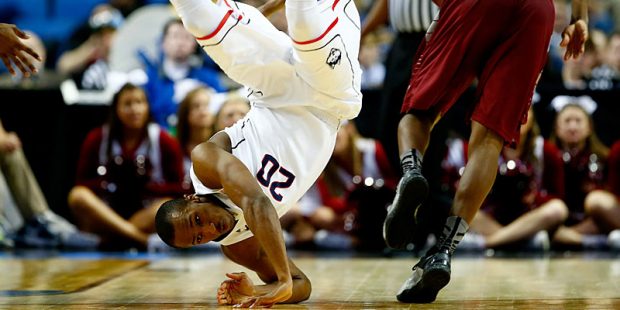 The 68-team field for the 2022 NCAA men’s college basketball tournament is set, and the South Region could well be the hardest of the four. The top three seeds (Arizona, Villanova and Tennessee) all come in with conference tournament championships – no other region has more than one of its top three seeds coming in with a tournament trophy. Houston also comes in with a tournament title, seeded fifth. Even the dark horses, such as Loyola-Chicago (#10) and Michigan (#11) are tough teams to eliminate. The only head-scratcher in the selection committee’s thinking process is #9 TCU, which at best had the resume of an NIT team. Let’s look at some College Basketball betting predictions you can use as action unfolds for the coming weekend.

Which first-round game will be the most exciting?

We like #7 Ohio State vs #10 Loyola-Chicago. The head coach is new (with Drew Valentine taking over for Porter Moser), but the key values of the team have not changed: defensive focus and discipline. Ohio State fell in the first round a year ago, when they entered as a 2-seed but could not eliminate Oral Roberts. Don’t expect Ohio State to overlook the Ramblers, but the Buckeyes did lose four of five coming into the Big Dance.

Which upset is the most likely?

People in the American Athletic Conference are upset that Houston “only” got a five-seed coming into the tournament. Houston played a soft non-conference schedule and then had a number of stumbles in their conference slate, getting swept by Memphis and losing at SMU. The Cougars rebound very well and can put on the clamps defensively, but without guards Tramon Mark and Marcus Sasser, the offense has been hobbled. They face UAB in the first round after the Blazers knocked off Middle Tennessee State in triple overtime in the Conference USA Tournament semifinals. The Blazers have shot 38% from three-point land this season, while the Cougars do well in three-point defense, permitting just 29% success. If the Blazers get hot, and if they can generate some turnovers from the Cougars’ backup guards, then the Cougars could be going home early.

What is Michigan doing here?

The Wolverines posted a 17-14 record and got bounced from the Big Ten Tournament in the first round, falling to Indiana. They have not won consecutive games in over a month. Yes, the Wolverines came into the year ranked sixth in the nation, but let’s ask ourselves why a team with this record and with this finish to the season is in the field of 68, when a team like Texas A&M, who beat both Auburn and Arkansas in the SEC Tournament, was left out of the field altogether. It really is time for the selection committee to get over names of teams.

What players will we hear about for (maybe) the first time?

Jared Rhoden, from Seton Hall, was All-Big East First Team; in a matchup with Ohio State in November, he needed just 15 shots to put up 29 points, and he has four 25+ point games on the season. The Pirates should be able to run right over TCU in the first round, and Rhoden could also make life hard for Arizona as they play for a berth in the Sweet Sixteen.

Jordan Walker of UAB has two 40-point games on the season, including 27 points in the Conference USA Tournament finals on Saturday – on just 11 shots. He gets to the charity stripe a lot and knocks down 88.3% of his free throws. He leads the Blazers in assists. Players like this wreak havoc in March.

Malachi Smith from Chattanooga was the Southern Conference PLayer of the Year. He shoots 50.5% from the floor, including 41.5% from behind the arc. He can get points in bunches, and the Mocs face an Illinois team that is ripe for an upset.