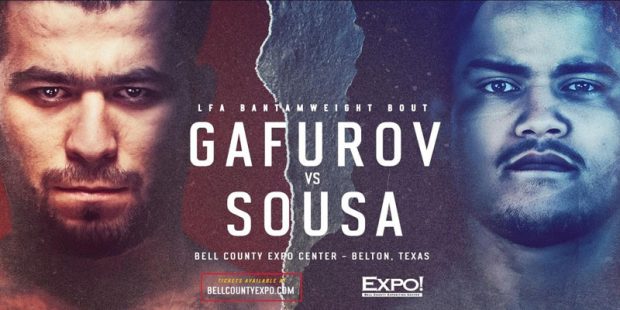 Legacy Fighting Alliance brings MMA to the middle of Texas on Friday, as LFA 134 will take place at the Bell County Expo Center in Belton, Texas. The headliner is a bantamweight fight featuring Herbeth Sousa and Muin Gafurov. The co-main event pits Milko Tucto against Olivier Murad in a featherweight dustup. We have the complete night’s fight card for you, along with some insights that may help Legacy Fighting Alliance betting.

Gafurov has had a difficult run lately, with all four of his losses coming in his last five fights. He has not won since the ONE Championship 81: Kingdom of Heroes back in October 2018, when he knocked out Leandro Issa in the first round. His four losses have all come on the cards, most recently in September 2021 when he lost a split decision to Chad Anheliger at Dana White’s Contender Series 38. When he wins, he tends to prevail via the knockout.

Sousa was scheduled to find Derinaldo Guerra in May of 2021, but that fight was cancelled, so when he faces Gafurov, this will be Sousa’s first action since February 2020, when he beat Alexander Kehstov unanimously on the cards at CFFC 81. His lone career loss came at Jungle Fight 89 against Paulo Oliveira back in February 2016. Since then, he has won five in a row, three times on the cards and twice via submission, getting Glyan Alves in a rear-naked choke in the first round in March 2019 and then finishing Taigro Costa with a guillotine choke in the first round four months later. Gafurov is trending downward, and I don’t see that ending soon.

Fernandez made his pro debut in June 2021, beating Manuel Medina unanimously on the cards at LFA 109. He beaten Jonathan Calderon with an arm triangle choke in the third round, and his last fight, in February, was a unanimous verdict against Cody Linne at LFA 123. Harris is also unbeaten in his three pro bouts. He won his debut in November 2015 in a unanimous decision. However, he took an extended break after having a December 2016 fight canceled, not fighting again until July 2018, when he beat Micheal Triana in a majority decision at Lion Fight 45. He took over a year off before fighting Manuel Reyna at Fight Night Champions 5, where he prevailed with a rear naked choke in November 2019. It has been 2 ½ years since his last fight, so there could be a considerable amount of rust.

Guzman comes in on a two-bout winning streak, having beaten Colton Herrera in a split decision last September and then dispatching Jervon Beverly with a triangle choke in the first round at Bayou FC 48 back in March, so Guzman is turning around on relatively short notice to face Marlow. Marlow has only fought three times in a ten-year MMA career. His pro debut came at TWC 14: Underground against Luis Barbeau, who he beat via knockout in the first round. Then he took a five-year hiatus, returning in 2017 at TWC 26: Mayhem to beat Idrees Wasi via knockout as well. He also knocked out Bruno Casillas at Fights at the Fox, needing two rounds to do it.