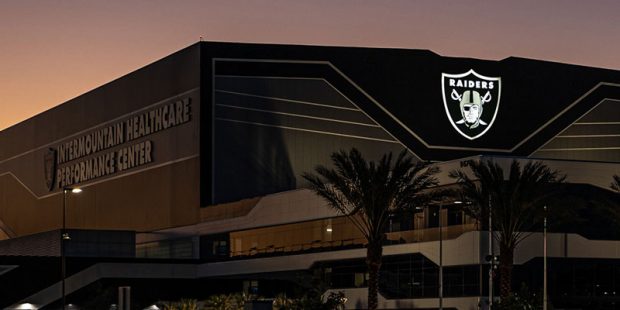 In 2020, the Las Vegas Raiders did not permit any fans in sparkling new Allegiant Stadium, making the argument that if the stadium could not be occupied 100% due to COVID-19 restrictions, then it would not be occupied at all. In 2021, the team led the NFL in ticket revenue, showing that the fan base is committed, at least for now. Going into 2022, quarterback Derek Carr has a ton to prove, as the team inked him to a three-year, $121.5 million extension. However, the guarantee ends after this season, and if they cut him after that, they only have $5.6 million in dead money. Carr has been reunited with his former Fresno State teammate, Davante Adams, so it will be interesting to see if the chemistry they had nine years ago reemerges in the NFL. Should you include the Raiders in your NFL betting this season? You should – and here are the top games.

NFL News: Must-Bet Games in 2022 for the Las Vegas Raiders

The only reason the Broncos come in as favorites at Allegiant Stadium is Russell Wilson. The Broncos added the longtime Seattle Seahawks quarterback hoping that he can rejuvenate what is a solid team around him – and that having talent around him again will allow the Wilson who led Seattle to a Super Bowl championship will reemerge. However, Carr has a number of skins on the wall of his own, and while the focus in Las Vegas has been on the addition of Adams, the team also added Chandler Jones, who has the most sacks (107 ½) and forced fumbles (33) of any player in the NFL over the last 10 seasons. It’s true that Jones picked up five of his 10 ½ sacks from 2021 in the season opener, but he still has the strength and speed to make quarterbacks pay. I see the Raider getting motivated by home underdog status here. Raiders to win straight up and cover.

This AFC West spectacular takes place on Monday Night Football, and this eight-point spread is surprisingly large. The Raiders have had success in Kansas City in the past, and it will be difficult for the Chiefs to keep their offense moving as quickly without Tyreek Hill. If this line moves down, I might become less reluctant to bet here, but I don’t see the Chiefs beating the Raiders by more than one score. The Chiefs just don’t have the defense, particularly in the secondary, to keep a team like the Raiders off the board consistently. Raiders to cover.

Unless the Seahawks decide to trade for Jimmy Garoppolo or bring Colin Kaepernick in from the most ridiculous exile in the history of the NFL, they will head into 2022 with Drew Lock or Geno Smith leading the offense. Both of these quarterbacks have poise, but neither has shown that he can perform as a starting quarterback with an NFL franchise. On defense, the front four are adequate, but the linebackers and secondary have injuries and age to deal with. The Seahawks are a team at the start of a lengthy rebuild, and the legendary motivational techniques that Pete Carroll likes to use may be wearing thin by the end of November, given the talent gap between the Seahawks and some other teams. Raiders to win straight up and cover.

This is a Christmas Eve game played at night on the road in a cold stadium. Dome teams tend to struggle when the temperatures drop during games, and this could be a snowy night. The Steelers’ defense will be tough as always, and this stands out as a possible trap game for a Raiders team that only has one outdoor contest after November 27. Steelers to win straight up and cover.