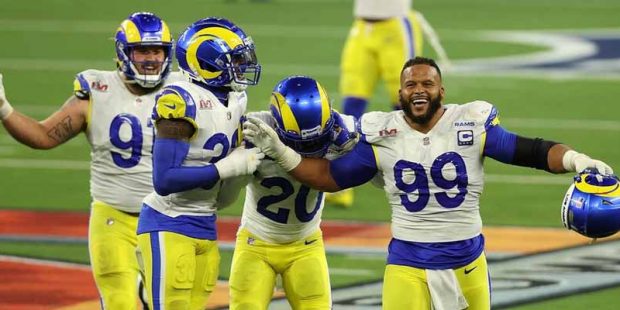 The Los Angeles Rams went after quarterback Matthew Stafford to bring a Super Bowl title to Hollywood, and the gambit – which included sending a couple of first-round picks and Jared Goff to Detroit – paid off. The Rams came back to beat the Cincinnati Bengals in Super Bowl LVI and now face the daunting task of repeating as champions, which no NFL team has done in two decades.

Let’s take a look at the Rams’ schedule for the fall, along with NFL betting picks for each contest.

The Rams could get their rings as the NFL opens the 2022 season with a possible preview of the next Super Bowl. Josh Allen returns after another elite season at quarterback, and the matchup between Jalen Ramsey and Stefon Diggs will be the featured dynamic for the game. The Bills made needed additions on defense and will, frankly, come in hungrier. 0-1.

Marcus Mariota will turn out to be a much easier quarterback to defend than Josh Allen was. A rebuilding Atlanta team will give the Rams the chance to work out some kinks from that opener. 1-1.

Remember that the Cardinals are a team that usually start strong before falling off the table down the stretch. Last year, the Cardinals won the first matchup with the Rams, but Arizona didn’t make any significant additions in the offseason, and DeAndre Hopkins is suspended for the first six regular-season games. 2-1.

Yes, the 49ers have owned the Rams in the regular season in recent years, but this time around, San Francisco is in shambles. Trey Lance is the heir apparent at quarterback. Deebo Samuel has asked for a trade. 3-1.

Dallas went 12-5 last year but lost key players on both sides of the ball. They also had a way of losing key non-division games in 2021. 4-1.

Baker Mayfield heading to Carolina should excite Panthers fans, but the departure of wide receiver A.J. Brown to Philadelphia means that Mayfield has one less exciting target down the field, and the Panthers are still in rebuild mode. 5-1.

The 49ers should be better this time around than they were in the first matchup, but coming out of the bye, the Rams should be ready for their second meeting with their NFC West nemesis. 6-1.

I’m not sure that Tom Brady has the hunger to take down the defending Super Bowl champions, given that this is his last season, but I also see this as a possible trap game. 6-2.

After that loss in Tampa Bay, the Rams will be ready, particularly on the defensive side of the ball, for Kyler Murray and DeAndre Hopkins. 7-2.

An early kickoff for a West Coast team? A date in New Orleans with Jameis Winston and the Saints? All signs point to another trap game, because the Saints will be better than a lot of people think this year. 7-3.

Here’s another potential Super Bowl matchup. The Rams don’t have as potent an offense in terms of quick-strike speed, but I’ll still take OBJ and Cooper Kupp over Marques Valdes-Scantling and Travis Kelce. 8-3.

Remember when the NFC West was a brutal gauntlet of a division? Now there are at least two rebuilding teams, and maybe 2 ½, depending on what happens in Arizona. 9-3.

The weather determines this game. Is it in the snow? Then the Packers outfox the Rams. Is it cold and clear? Then the Rams simply have too many weapons, even though they are a dome team in a warm-weather city. 11-3.

This is the annual cartoon effects game, simulcast on Nickelodeon to grab the interest of kids. I’m not sure if this works on Christmas afternoon, though. Besides, the matchup of Russell Wilson and Matthew Stafford will be interesting enough. Stafford has more weapons around him, although the defenses might be roughly equal. 12-3.

The Rams need a win to get the bye, so the starters take the field and take the game to the Seahawks. 14-3.