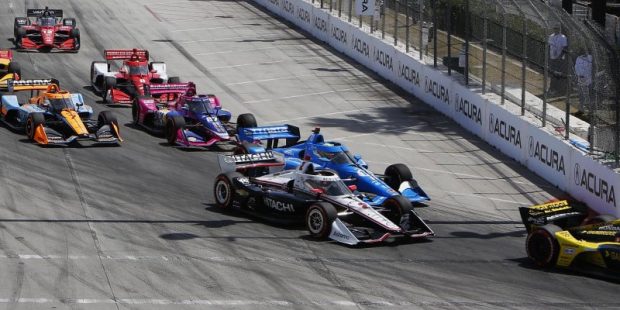 Canada has not welcomed the NTT IndyCar Series since 2019, but the “Roar by the Shore” returns to the Exhibition Place street circuit in Toronto on Sunday. The race starts at 3:00 pm Eastern time, and you can catch the action on the Peacock streaming network. The sport also has some drama going on coming into this weekend’s racing, as Chip Ganassi Racing announced that Alex Palou would return for 2023. The problem was that the team issued a press release with a quote from Palou that Palou says he did not actually make. Instead of returning to Chip Ganassi, it looks like Palou will drive with McLaren Racing in 2023. Palou issued a statement indicating that he would leave Chip Ganassi for personal reasons at the end of the season. For now, he is with his old team, but it will be interesting to see how the team dynamics look going forward. Check out the IndyCar betting odds for each driver in Sunday’s race, along with our wager card suggestions.


The street circuit that drivers will face in Toronto has always had a reputation for being tight, but the pit boxes have to be shorter this year so that all the cars will fit. In 2019, 22 cars raced at the Roar on the Shore, but there will be 25 this year. This makes the pit boxes 35 feet instead of the customary 40.

The circuit contains 11 turns, and drivers will complete 85 laps. The most exciting part of the course is the front straight that runs to Prince’s Gate at Turn 1, although another place for passing comes on the lakeshore Boulevard straight, going into Turn 3, which is a 90-degree right hand turn. Finding ways to balance competitive fire with patience and stamina will be key for the winning driver.

Simon Pagenaud won the pole the last time IndyCar raced in Toronto, and he has always been able to get out of the course without damage. He and Helio Castroneves both did well at Mid-Ohio, as Castroneves took eighth and Pagenaud came in tenth.

Scott McLaughlin comes in fresh off a win at Mid-Ohio. Will Power came in third, with his usual consistency, and Josef Newgarden came in seventh, which means that Team Penske had all three drivers in the top ten. Given the quality of the cars and drivers, these three should be in the top ten again.

David Malukas came in ninth at Mid-Ohio, running a solid race from start to finish. He has had a propensity to turn up in the wrong place at the wrong time, but that didn’t happen last time, and he had his best result of the season.

Romain Grosjean has built a reputation for running into opponents this season, but the tables were turned when Alexander Rossi ran into him at Mid-Ohio. Rossi, Grosjean’s teammate with Andretti Autosport, also took out another teammate, Devlin DeFrancesco, in the race’s later stages.