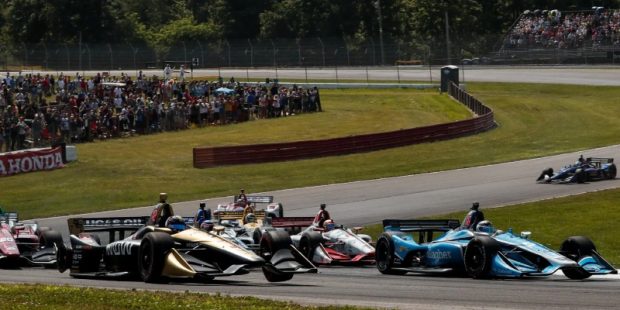 The NTT IndyCar series moves to Mid-Ohio Sports Car Course in Lexington, Ohio, for the Honda Indy 200 on Sunday, July 3, with the action starting at 12:55 pm Eastern time. Marcus Ericsson, who won the Indy 500, has a narrow lead in the driver’s championship standings. Josef Newgarden won the last IndyCar race at Road America, as he looks to mount a comeback and take his third series championship, although he also trails teammate Will Power. Let’s look at IndyCar betting odds for the field, along with facts about the track and some wagering suggestions.


The course at Mid-Ohio Sports Car Complex runs 2.258 miles and features 13 turns. Turn 2 is called “The Keyhole” because it provides passing opportunities near the start of a lap. A long straightaway featuring a hard braking zone that is also off-camber challenges cars before they hit the main back straight. That straight goes to a set of esses, each with a unique corner radius, which will open up side-by-side racing as the drivers go into Thunder Valley. The start actually happens on the backstretch going into Turn 4 due to safety concerns.

Seeing Marcus Ericsson in fourth on the odds list is interesting, as he leads Will Power by 27 in the points standings, and the three drivers who appear above him finished no better than 19th place in the last race at Roads America. Ericsson leads Alex Palou by 47 points and Scott Dixon by 69. Dixon and Palou have won the last two championships.

Josef Newgarden is the only IndyCar driver who has won more than one race in 2022, with three victories, one each on an oval, a road course and a street course. However, in five other races, he only has one top-12 finish. That inconsistency is frustrating to fans (and sports betting followers), but he is third in the driver standings. With a little bit more consistency, Newgarden could come on, erase that gap and take the title.

Scott Dixon has more wins at this race (6) than anyone else in the field, or in history. It is hard to count him out, particularly since he is in the running for the driver’s championship this season but needs to start climbing the points standings as soon as possible.

Looking for a dark horse? Check out Romain Grosjean, who came over from Formula 1 to join IndyCar this season. As was the case in Formula 1, Grosjean has at times failed to live up to the hype. While he might not win the race outright, he could end up on the podium, so if you want to look at a top-3 prop, he might make even more sense to include.