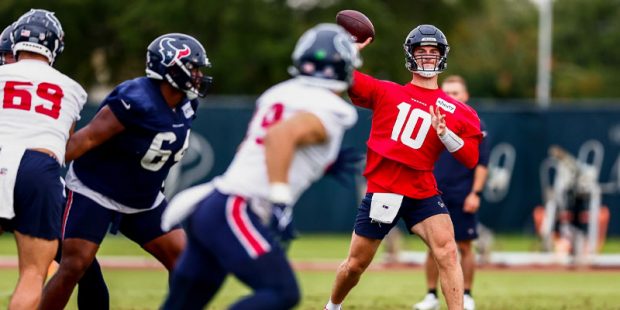 The Houston Texans posted a dreadful 4-13 record in 2021, but an impressive three wins came against AFC South opponents. The Texans opened at home with Jacksonville and rolled to a 37-21 win that was deceptive in a number of ways. The Jaguars featured a new head coach in Urban Meyer, who was so toxic that he got canned mid-season after revelations he had kicked his kicker. The offensive line was so porous that rookie quarterback Trevor Lawrence spent the game running for his life. The Texans had Tyrod Taylor at quarterback then, and he threw for 291 yards and two scores while averaging 10 yards a carry on four attempts. Tyrod Taylor ended up giving way to overmatched rookie Davis Mills as the Texans opted early to play for the future. After the bye, the Texans rolled to a mystifying win at Tennessee, and then they somehow stacked up 41 points against the L.A. Chargers in Week 16 for their only win outside the division. Can the Texans do better in 2022? Check out our thoughts as you think about your NFL betting for the season.

NFL News: What Are the Odds? Will Houston Have a Better Record in 2022?

The good news for the Texans is that, when they traded Deshaun Watson to Cleveland, they picked up some more first-round draft choices that should accelerate their rebuild. However, the dysfunction within the organization, starting at the top with team ownership and reflected through GM Nick Caserio and placeholder head coach Lovie Smith, it is a real question whether the Texans are going to become the second team in the Lone Star State that cannot overcome the leadership shortcomings of team management.

It’s not that hard to get better than a 4-13 record, right? There are some exciting draft picks to look at. Cornerback Derek Stingley Jr was the team’s top pick, but he joins a secondary that was easy to pick apart and gave up some huge plays. The team also drafted Kenyon Green, but he might be the best offensive lineman – as a rookie. Marlon Mack joins the team as a free agent at tailback, but even if Green & Company can open up some holes, Mack is not the most explosive choice to burst through them. He ran well for Indianapolis before blowing out an Achilles tendon during 2020, but he has not had a chance to do much since then. The risk is real that nine-year vet Rex Burkhead and rookie Dameon Pierce will have to shoulder the burden.

Pep Hamilton was elevated to offensive coordinator because of his relationship with Davis Mills, and the West Coast offense that Hamilton brings will open up the passing game while often using blocking schemes designed for a power running attack. The idea is to build a tough, physical team, and the restructuring of left tackle Laremy Tunsil’s deal allowed the team to ink their other starters on the O-line to deals, so the team will at least have stability, even if only two of the starters are considered elite.

Houston did extend wide receiver Brandin Cooks through 2024, and the team also added John Metchie III in the second round, but Metchie tore an ACL in the SEC Champoinship and received a diagnosis of leukemia at the outset of training camp, so the Texans don’t expect to see him this season.

On defense, the Texans were second-worst in the league against the run and permitted more 20+ yard pass plays than 29 other teams. They also posted a -172 point differential, the worst in franchise history. Smith was the defensive coordinator last year and somehow got elevated to head coach after that performance. Also, star safety Justin Reid left through free agency for Kansas City. The team drafted two defensive backs in the first two rounds, so we will have to see how quickly they mesh.

The Texans play the NFC East, the AFC West and Chicago as their cross-conference game. It’s possible that they only win two or three of those games, and it’s hard to see them winning three divisional games. So I would say that 4-13 isn’t a bad prediction again this season, although 5-12 or 6-11 could be reachable.