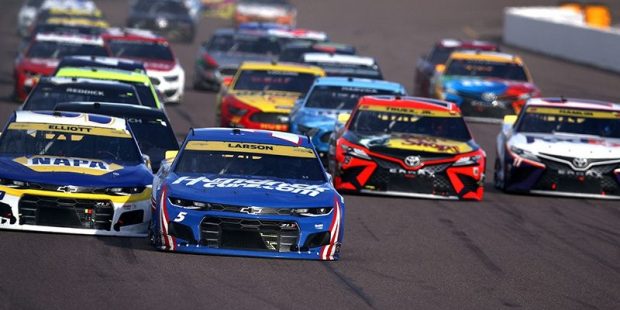 On Sunday, Erik Jones paid off on +6000 odds to take the Cook Out Southern 500 at Darlington Raceway, getting the first win for the #43 Chevrolet since 2014. This was the first playoff race for the NASCAR Cup Series, and Jones kept Denny Hamlin at bay over the last 20 laps, becoming the first non-playoff driver to win the first playoff race since the elimination format emerged in 2014. This was the third win in Jones’ career, returning glory to the #43, which Richard Petty had used while winning seven series championships. This race dropped Chase Elliott out of the series lead after he had to retire from the race in last place after an unfortunate spin on Lap 113, just before the end of Stage 1. He is now ninth in the standings, with penty of motivation to bounce back this week. The second playoff race is the Hollywood Casino 400, set for Sunday afternoon at Kansas Speedway. You can catch the action on the USA network, with the radio call on SiriusXM and the Motor Racing Network. We have the NASCAR betting odds for each driver and wager card suggestions.

Kyle Busch might have won the first race at Kansas this year, and he led 155 laps at Darlington last week before settling for the loss.

Kyle Larson almost had his car die at the Southern 500 last week, but then things righted themselves at the last minute, and Larson made up some ground in the last few laps. Is he ready to race a Next Gen car in the postseason?

Denny Hamlin had victory in his hands at Darlington but let it get away. His car has won at Kansas, with Kurt Busch at the wheel, so Hamlin is definitely the favorite for a reason.

Martin Truex Jr came in sixth at the spring race at Kansas, but he had a tire blow right at the end of a stage and drew a pit road penalty as well. Without those two factors, it’s likely that he would have won that race.

Ross Chastain was bitten by a mechanical failure last week. At the spring Kansas Race, a caution and a poor pit stop got him napping during a pit cycle, and Chastain could not overcome those setbacks.

Christopher Bell drives one of those speedy Toyotas that excelled at Kansas in the spring and last week at Darlington, and those cars could be fast again this week – and Bell could snag a win.

Ryan Blaney looked pretty good at Kansas in the spring race, and the clean air could have made a difference.

William Byron had a tire go while he was in the lead in Stage 2. At Darlington, he had 260 laps inside the top five, more than all but one other driver.

Chase Elliott also had bad luck at Kansas and Darlington, but don’t use that result to handicap his work this weekend.

Joey Logano won the pole but settled for fourth. They have short-run speed, which speed, which could be a solid strategy at a track that has one groove and minimal chances for passing.

Kevin Harvick had a rough race at Darlington, even before his car caught fire. Practice and qualifying looked ugly as well. In the spring Kansas race, his car also looked sluggish.