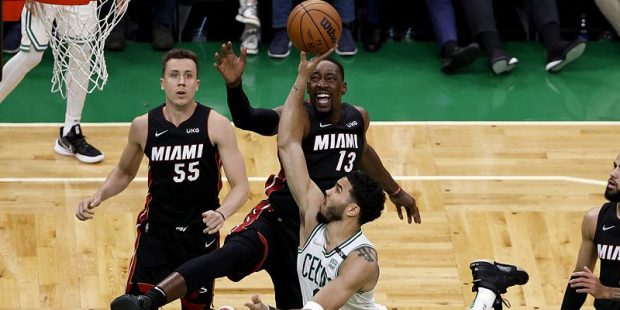 Back in January, the sports rumor mill in Boston was abuzz with the news that the team would be trading Jaylen Brown or Jayson Tatum after the season because of the difficulty the two had in working together. No one is saying that now, after the Celtics have turned a 2-1 deficit in the NBA’s Eastern Conference finals into a 3-2 lead. Brown had 25 and Tatum chipped in 22, as a five-point halftime deficit became a 93-80 win. Boston’s defense clamped down, and the Heat only put up 38 points after halftime. Can Boston finish the Heat off at home on Friday night? Read on for our NBA betting prediction.

Why should you bet on the Heat?

From a betting perspective, two factors come into play here: the value and the trend in the series. The Heat have already won a game in Boston in this series, and these two teams have spent the conference finals trading haymakers. It would not surprise me at all to see Miami flip the script and force Game 7. It is true that the Heat’s starting five have spent the last two games playing awful ball.

Why should you put your money on the Celtics?

Boston has all of the momentum in the series right now after winning two in a row and absolutely squelching the Heat offense in the second half of Game 5. In addition to the big nights for Brown and Tatum (who also had a dozen boards and nine assists), Al Horford put up 16 points, and Derrick White scored 14. The Celtics’ smothering defense has played a significant role in the disappearance of the Miami offense, which only shot 17% from the floor during the third period of Game 5.

Both teams come in with a reputation for solid defense. However, it is the Celtics who have put taken control, pushing Miami’s back against the wall. Boston is 42-7 this season when their opponents score no more than 105 points, and if they can keep their defense going, they should make this 43-5.

It’s hard to imagine Miami shooting as poorly in Game 6 as they did in Games 4 and 5, but teams tend to press when they feel anxious (check out how the Suns looked in Game 7 against Dallas). The two starting guards for the Heat (Max Strus and Kyle Lowry) combined to go 0 for 15 to start the game, the worst start for a guard duo in any playoff game since 1970, when the league started tracking stats for starters. I think the Heat do better and cover, but the Celtics advance with a 99-94 win.