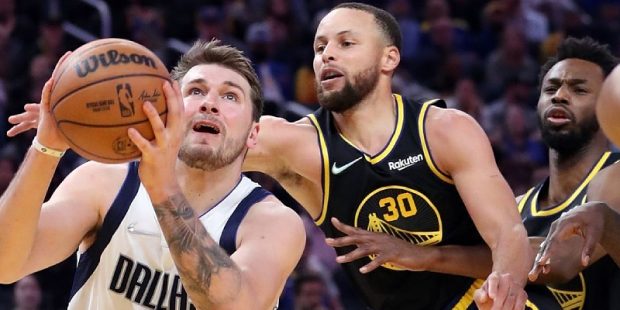 The Phoenix Suns have to be kicking themselves after watching the way in which the Golden State Warriors have had such little difficulty dealing with the Dallas Mavericks in the Western Conference Finals. The Mavericks ran the Suns out of their own arena in Game 7 of the conference semifinals when all the Suns had to do was take advantage of the only real flaw left in Dallas’ roster – the lack of a rim defender. The Mavericks have Dwight Powell and Maxi Kleber to trot out there, but Kleber’s real contributions come from behind the three-point arc, and when he goes cold, he’s a liability. Neither Powell nor Kleber can (or will) defend the rim reliably, so we’ve seen play after play involving the Warriors getting easy lay-ups and dunks, most notably Andrew Wiggin’s posterizing of Luka Doncic during Game 3. The Warriors now lead the Mavericks, 3-0, in the best-of-seven series. No team has ever come back from a 3-0 deficit, and given that the Mavericks have basically played 3 ½ solid quarters out of 12 so far, even if they can win Game 4, the series is basically over. What should you do with Game 4 in your NBA betting? We have your prediction right here.

Why should you bet on the Warriors?

The Warriors found Andrew Wiggins in the bargain bin after the former first-round draft choice of the Minnesota Timberwolves had decided that they couldn’t use him. All he did against Dallas was put up a career-best 27 points and limit Luka Doncic to 53 percent shooting from the floor. Doncic did have 40 points on the night, but the Warriors held Maxi Kleber and Reggie Bullock scoreless, as the duo kept bricking three-pointers all night, but you have to give the Golden State defense credit for contesting some of those misses.

The game was actually more of a rout than the final score indicated, as Dallas would get within five with 1:15 remaining in regulation, but the Warriors’ role players outplayed their Dallas counterparts, with Jordan Poole nailing a dagger from behind the arc just inside the last minute. The Warriors simply have too many scorers, but that’s not really the problem: the Warriors are dominating the boards, particularly on the offensive end, because the Mavericks have no one who can control the paint.

Why should you put your money on the Mavericks?

The Mavericks are a team that has refused to quit all season long. Going into Game 2, the Mavericks were 10-0 in the 2021-22 season (including the regular season and playoffs) in games coming after a loss of at least 20 points. They built a lead of 19 points in the second quarter of Game 2, but their red-hot three-point shooting faded, and their problems on interior defense became a real issue. During the regular season, the Mavericks erased late deficits of 18 points or greater against Golden State twice, but the Warriors are coming with a lot more resolve now.

If the Mavericks are going to at least cover, they have to get better shooting from their role players, and someone has to make going to the rim seem like a chore, instead of simply turning the free-throw lane into an expressway to the basket. No one has been willing to do that in the first three games against Dallas, which has to make players and coaches in Utah and Phoenix wonder why they didn’t think of this in the first two rounds.

Dallas has come a long way this year, getting past the first round for the first time in 11 seasons. However, they don’t have the paint presence to challenge the Warriors, and this has been a problem for the team since Tyson Chandler left the first time. This is a lesson for the team’s ownership to consider going into the off-season, but it’s hard to see Dwight Powell learning how to deal out physicality now, if he hasn’t learned it before. I predict a final score of Golden State 111, Dallas 104.