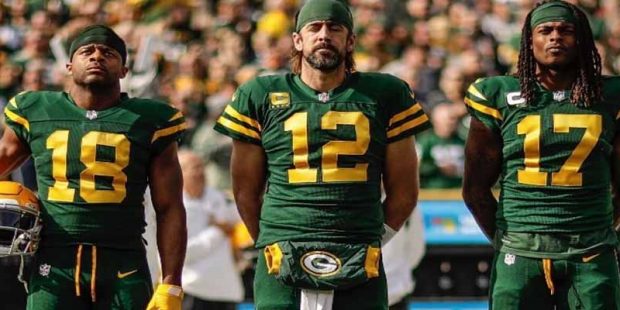 The Green Bay Packers start the 2022 season away from Lambeau Field for the fourth straight season. In compensation, perhaps, they get to finish against the Detroit Lions for the sixth time in the last seven campaigns. They visit the Miami Dolphins on Christmas Day and welcome Minnesota to town to ring in the new year. Aaron Rodgers won’t have Davante Adams or Marques Valdes-Scantling running routes for him this season. Can the Packers continue their domination of the NFC North anyway?

We have an online NFL betting pick for each of their 17 games.

Remember last year, when the Packers got blown out in Jacksonville by a New Orleans Saints team that couldn’t use the Superdome? I see another slow start this year, as the Packers have to get used to living without their two top receivers and they face a rejuvenated Vikings team. 0-1.

The Bears have traded away all the talent around Justin Fields, so expect his first full season as the starter to be a difficult one. 1-1.

Tom Brady has more weapons around him, and he won’t want to lose what is likely his last regular-season tilt against Aaron Rodgers. 1-2.

I don’t think Mac Jones is ready for this duel, even with Nelson Agholor in the fold running routes for him. 2-2.

I’m not sure why the NFL thinks that sending the Giants to London is a draw for the league. 3-2.

The Jets’ defense should be better than it was last season, but it won’t be good enough to stop Rodgers in the second half. 4-2.

This feels like a trap game, as the Commanders have a stout enough defense to make the Packers’ lackluster receiving corps pay. 4-3.

This should be a blockbuster, but if the Bills have Tre’Davious White back and healthy, Buffalo’s defense should be able to control the rhythm here. 4-4.

The Packers will have a lot of frustration to take out on the Lions. 5-4.

Mike McCarthy returns to Lambeau Field for the first time since he coached the Packers. Think Aaron Rodgers will be motivated? 6-4.

Will Derrick Henry still be healthy? Will the Titans be able to move the ball without A.J. Brown? 7-4.

Aaron Rodgers will lead the Packers down the field for a game-winning drive to finish this one. 8-4.

The Bears will bring maximum effort, but ultimately it will not matter. 9-4.

The Rams just have too many weapons on offense to lose this game, even on the road. Right? A dome team playing in the cold, at night? 10-4.

Remember when this team was just 4-4? This feels like a potential trap game, but I don’t think Miami’s offense can deliver. 11-4.

The Pack earns the split as we see what happens to Kirk Cousins in crunch time. 12-4.

Green Bay has a division title clinched but can’t get the bye, so they rest their starters against Detroit and lose a meaningless game. 12-5.