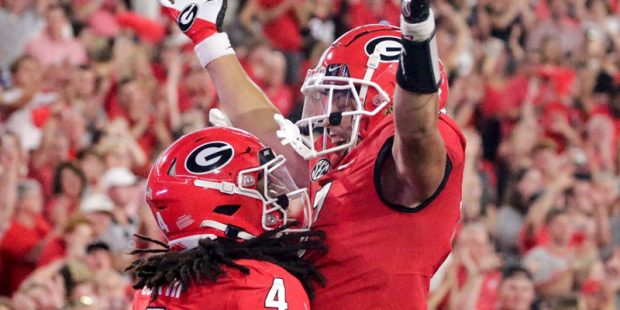 One of the most intriguing Week 1 matchups in the 2022 college football season has the Oregon Ducks traveling east to take on the Georgia Bulldogs in a neutral-site game at Mercedes-Benz Stadium in Atlanta. Even though this game is not on Georgia’s campus, its locale guarantees that the stands will be full of red-clad Bulldog fans. Oregon’s new head coach is Dan Lanning, who was Georgia’s defensive coordinator last year, as the Bulldogs won a national championship. An Oregon win would make major waves in the current college football alignment situation, with the Pac-12 on life support after losing UCLA and USC to the Big Ten. Georgia is a huge favorite in that game, and if they win, their next real challenge would not come until October 29, when they face Florida. After that, it is smooth sailing until the SEC Championship. But are the Bulldogs still a contender for the national championship? Check out our thoughts on this question as you consider your College Football betting choices for the coming college football season.

The talent drain has been significant

Since winning the national championship, Georgia has lost a lot of elite players. In the NFL draft, a record 15 players went into the pro ranks. The defense was the dominant unit for Georgia in 2021, limiting teams to 10.2 points per game and 4.2 yards per play. However, it was the defense that also lost the most stars, and now it’s time for defensive backs Kelee Ringo and Christopher Smith to step up, along with linebackers Nolan Smith and Robert Beal as well as lineman Jalen Carter. The recruiting has been impressive, and Georgia should still have one of the best defenses in the SEC.

The offense still has elite playmakers

Quarterback Stetson Bennett is back, and after some hiccups in the SEC Championship, Bennett led the Bulldogs to a pair of impressive wins in the College Football Playoff, eliminating Michigan and Alabama to get the title. Brock Bowers returns at tight end, perhaps the best at that position in the nation. Arik Gilbert and Darnell Washington are better blockers than receivers but are also slid tight ends. Wide receivers Adonai Mitchell and Kearis Jackson are Bennett’s top two route runners, and Kendall Milton and Kenny McIntosh are an intimidating tandem at tailback, with an O-line ahead of them that will be one of the nation’s best.

The schedule sets up nicely

After that neutral-site date with Oregon, here’s how the Bulldogs’ schedule unfolds: Samford, at South Carolina, Kent State, at Missouri, Auburn, Vanderbilt, and then the bye week. South Carolina is always an intriguing matchup because of the geographical rivalry, but none of these teams have the talent to stop Georgia. Coming out of the bye, the Bulldogs have their annual date with Florida in Jacksonville, and that is the sort of rivalry that produced upsets more often than not. If Georgia gets through that gauntlet, then they finish with Tennessee, at Mississippi State, at Kentucky and at home against Georgia Tech in a non-conference finale. Tennessee is expected to be better this season, and going to Kentucky has become more of a challenge the last couple of seasons. Even so, an SEC Championship without Georgia would be a major surprise.

But what about the SEC Championship…and the College Football Playoff?

Georgia would have to lose two games to miss the College Football Playoff. Even a loss to Oregon in the opener, or a loss to Florida, wouldn’t be enough to knock them out, if they made it to the SEC Championship. If they lost to Alabama for the SEC title after that earlier loss, the Bulldogs would probably miss the playoff, if Notre Dame had no more than one loss. If the Big Ten Championship features two unbeaten teams, those teams both might go ahead of Georgia, and if the Pac-12 champion were unbeaten or had just one loss, that team might get in ahead of Georgia as well. And what if Cincinnati goes 13-0 again? We’ll know more about Georgia after that Oregon game, but for now, I have no reason to doubt the Bulldogs’ status as a contender.