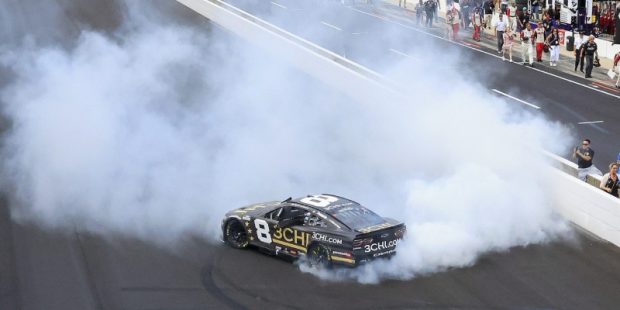 This weekend’s action at Michigan International Speedway comes to a climax with the Cup Series’ FireKeepers Casino 400, set for Sunday at 3:00 pm Eastern time. Michigan boasts a 2-mile, D-shaped track known for its broad surface, long straightaways and sweeping corners, spacious enough to avoid plate restrictions – and to permit high speeds. Last week, NASCAR was out on the road, with Tyler Reddick winning the Verizon 200 at the Brickyard on the Indianapolis Motor Speedway Road Course. That win came in overtime in a gripping battle with Ross Chastain, who got penalized for his trickery at the first corner. Reddick has won twice in the Cup Series in his career – with both wins coming in July 2022, as he also won at Road America on July 3. Reddick led 38 laps, but it was not until a multi-car crash in Turn 1 sent things to overtime that Reddick got his chance. Reddick lined up next to AJ Allmendinger for the restart. Chastain went wide on the restart and chose the access road past the corner before returning the track, alternating in the lead with Reddick during the first lap. Chastain drew a 30-second penalty that officially moved him down to 27th, making Austin Cindric the runner-up. Let’s take a look at the NASCAR betting odds for Sunday’s race and our wager card suggestions.


Before we talk about some drivers, let’s talk about the pole winner to finish first prop (+700). The pole winner gets the #1 pit stall, and Michigan International Speedway is a track where the opportunities to pass are limited. So pit strategy often determines winners here. Restarts also play an important role, and with the 550 package gone, leaders don’t need pushes. The leader can get off to a good start and drive away. The bottom groove on this track is where passing moves go to die. With that in mind…

Christopher Bell becomes an intriguing pick. He drives the #20 JGR Toyota, which has been one of the top cars in qualifying in 2022. Bell qualified third, first, third and third at four consecutive intermediate tracks. Michigan is a high-speed track, which means that teams will fight drag in any possible way, and cars that can dominate qualifying should be able to get out to an early lead and run away. With Bell’s qualifying track record, he has an excellent shot at the pole – and the victory.

Kyle Larson won three straight races at Michigan International Speedway between 2016 and 2017, all in cars with low downforce. HIs only win in a Next Gen car came at Fontana.

Kyle Busch has only won one race this season, on the dirt track at Bristol. However, on intermediate tracks, Busch has put up the best metrics in 2022.

Chase Elliott ended up settling for 16th last week, but he was on the front row at the overtime restart. He won the last race on an intermediate track, in Nashville, and also had the second-most fantasy points in the race.

Ross Chastain is an elite driver, even though he has shown that he will (literally) cut corners at times. Don’t count him out, especially at this slight value.

Martin Truex Jr is another deceptively fast driver, with metrics this season that mirror those of Kyle Busch. He is still looking for his first 2022 victory despite those metrics, but this has been an unusual year when it comes to correlating wins and speed.

Kevin Harvick actually liked the 550 package, as he won three of the five races at Michigan International Speedway with the high-downforce package. However, he also won in the last Cup Series race at Michigan with a low-downforce package, back in 2018, so he makes a solid value pick as well.