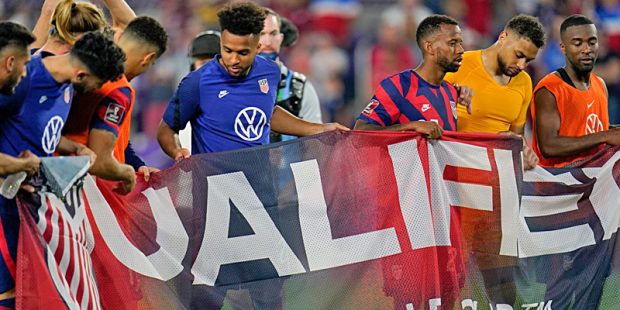 Now that the draw for the 2022 World Cup, set for Qatar, has taken place, the United States men’s national team knows its opponents. Its first game will come against the winner of the European playoff (Ukraine, Wales or Scotland). Then they will face England, and they will finish group play against Iran. Ghana, who always seems to end up in the same group as the United States, is not on the schedule. The 2022 World Cup betting odds for the United States to win in Qatar 2022 sit at +10000. The best finish a United States side has ever achieved at a World Cup was the semifinals, back in 1930, when they settled for third. The last time they advanced out of the Group of 16 was in 2002, when they beat Mexico to get to the quarterfinals, where they fell to Germany. Can the United States pull it off this time? We’ll see. Read on to find our thoughts about their chances.

Let’s start with a more pressing question: can the United States get out of group play? The top two teams advance, and this is not an easy field. Iran defeated the United States when Iran made the World Cup back in 1998, and they are always one of the top teams in the Asian Confederation. England is the favorite to come out as group winner, but the United STates is very familiar with the English roster.

The biggest wild card is the team that will emerge from the European playoff. The winner of Wales and Scotland will play Ukraine in a match that has not yet been scheduled due to the Russian invasion of Ukraine. Getting Wales or Scotland would give the United States a game against a side that plays a style very similar to that of England, and from an intangible standpoint, seeing Wales or Scotland would be preferable to seeing Ukraine; if Ukraine gets to the World Cup, the emotional power that would come for representing their country after Russia had turned so much of it to rubble could propel them a long way – to an upset win in their group play opener, at the very least.

If the United States can get out of group play, the offense needs to be consistent. It looked like Pepi (of MLS’ FC Dallas) was going to be the striker, but since he was transferred to Augsburg in the Bundesliga, he has not scored – not for Augsburg, and not for the national team. Berhalter attributes this to Augsburg’s decision to have him run along the back line instead of playing from service; the United States’ system involves service, which should free up Pepi more for goals. However, that hasn’t happened yet, in a scoring drought that extends back to September.

Christian Pulisic did put up the hat trick against Panama, but Panama won’t be waiting in the last 16. Can he emerge as the striker the team has been waiting for? One of those two players will need to do much, much more than Jozy Altidore was able to accomplish during his time with the team. The United States’ goals have come primarily from the wings, central defenders and fullbacks. However, there is precedent for a team to emerge as a surprise; in 2018, Croatia put on an amazing run that propelled it all the way to the finals, where they fell to France, and Croatia’s talent was not superior to what the United States will bring to Qatar.

No country outside South America and Europe has ever won a World Cup. The United States didn’t even finish first in its confederation, behind Canada and Mexico. So a World Cup title is unlikely. Getting out of group play and potentially taking down a team to get to the quarterfinals? That’s what would look like success for this team, so don’t let that +10000 moneyline seduce you into opening your wallet.