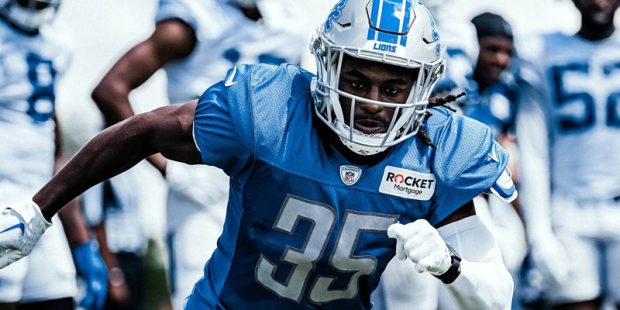 The Detroit Lions are one of the NFL’s leaders when it comes to futility. The franchise has one playoff win since 1957. Who was President of the United States in 1957? Dwight D. Eisenhower. Color television was not a widespread commodity in 1957. Alaska and Hawaii had only been states for eight years. The last time the Lions won a division title was back in 1993, when the division was called the NFC Central. When the team has had transcendent players, such as Barry Sanders and Calvin Johnson, it has pushed them into early retirement rather than facilitating championships out of those stellar individual careers. Last year, the Lions went 3-13-1. In Week 18, they had a chance to lock up the top pick in the 2022 draft, but they took advantage of a Green Bay team resting its starters and won, 37-30. That was a nice result to take into the off-season, though, and the team still got its top pick, Aidan Hutchinson out of the University of Michigan. Can the Lions post an improved record this season? Read on to get our perspectives as you start to line up your NFL betting for the 2022 NFL year.

NFL News: What Are the Odds? Will the Detroit Lions Be Better in 2022?

Aidan Hutchinson was not the only positive move that the Lions made to their roster. Before the 2021 season, the team inked Charles Harris to a $13 million, two-year contract, and he went out and led the team in sacks. In the fourth round of the 2021 draft, the Lions took receiver Amon-Ra St. Brown, who came in and broke the franchise rookie records for catches and receiving yards. The team started 0-10-1 but then won three of their last six games. The streak began with a last-second win over the Minnesota Vikings, and that .500 finish to the season made Lions fans hopeful.

Not all of the spots are bright ones, of course. Is Jared Goff really a franchise quarterback? He has moments of greatness, as we saw occasionally last year – and as we saw when he led the Rams to a Super Bowl. When Dan Campbell took the play-calling duties from offensive coordinator Anthony Lynn after the bye week, Goff improved, posting a 107.1 passer rating in five healthy games after the switch. Goff also meshed well with passing game coordinator Ben Johnson, who is the new offensive coordinator. With more talent around him, Goff should be able to find more targets down the field. However, he seems more of a caretaker in that role, which means the Lions need to look for their next quarterback. On defense, they are thin at cornerback, interior D-line and linebacker. If you’re wondering why Detroit is the only NFL team that will not play in prime time this season, the roster is a big reason.

On the other hand, the O-ine is solid. Wide receiver Jameson Williams arrives from Alabama via the draft, and if his ACL is healed from last season’s tear, he could produce. Tight end T.J. Hockenson can put up numbers if he can stay on the field. The secondary got a couple of good additions, and the Lions have some solid edge rushers. Dan Campbell is preaching a message that his players are hearing and processing: even though the Lions did not win any of their first 11 games, the effort never let up, as we saw in their last six contests.

Another solid decision by the Detroit front office had to do with contracts. They brought in some players who might be able to help but have flown under the radar – and they gave each of them a one-year deal. Cornerback Mike Hughes, safety DeShon Elliott, one-time Lion draft pick Jarrad Davis, and wide receiver D.J. Clark could all add value. If they don’t, then there is no dead cap space looming if they decide not to re-sign them. The only big loss in free agency was linebacker Jalen Reeves-Maybin, and the Lions should be able to cover that spot.

So yes, the Lions should be improved in 2022. By how much remains to be seen, but the team has a focused message and a commitment to hard work – and management has added to a pool of talent that already had some potential.