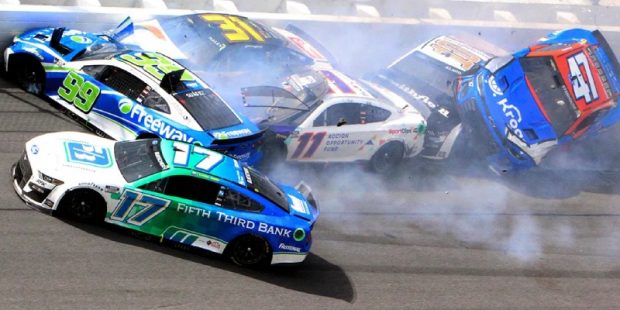 Labor Day weekend finds NASCAR in South Carolina, as Darlington Raceway will host this week’s races. The Cook Out Southern 500 is the Cup Series event, set for Sunday evening at 6:00 pm Eastern. The broadcast is on the USA Network, with the radio call on Motor Racing Network and SiriusXM. Last week, Austin Dillon picked up the win in the Coke Zero Sugar 400 at Daytona International Speedway. The race was delayed for over three hours due to rain, and Dillon benefited from avoiding severe damage in a wreck on Lap 125 and from surviving another mess at Turn 1, moving into the lead before the stoppage. The restart saw Dillon fall behind Austin Cindric from the restart at Lap 145, but then Dillon made his move on Lap 158 to take the win. He tapped Cindric’s car at Turn 1, and while Cindric made a save, three cars moved by him. Tyler Reddick drafted behind Dillon and left Cindric in third, but the finish was razor-thin, as Cindric was just 0.140 seconds behind Dillon. Who will win this week? Check out the NASCAR betting odds for the drivers and our wager card tips.

Kyle Larson is a worthy co-favorite because he has been one of the top all-time drivers at Darlington – but he still doesn’t have a victory here. He was the runner-up to Hamlin after trying to pull off a video-game style maneuver in the last turn last fall, and back in the spring he spun out while trying to pass into second place.

Ross Chastain has also seen aggressive tactics backfire here. He tried to take the lead from Denny Hamlin on the first restart for Stage 3, and things went awry in the spring race.

Denny Hamlin is the defending champion of this race and almost won in the spring. His car took off in Stage 3, but a late caution and pit cycling went against him, taking him out of the lead. On the next-to-last restart, he got in traffic and ended up in a big pile-up.

Joey Logano won the spring race after benefiting from a horrendous crash, but a win is a win. Will he get lucky here twice in a row?

Kyle Busch was rolling in the top five here in the spring race, but then Brad Keselowski wrecked right in front of him, and Busch could not avoid running into Keselowski.

Martin Truex Jr was another wreck victim in the spring race here. He lined up on the second row on Lap 261 and went three-wide going into Turn 1. His car ended up loose and led to the huge pile-up.

William Byron benefited from the cautions, outdriving Joey Logano at the final restart and moving into the lead. Logano said that Byron sent him into the wall, but Byron said Logano just got scared. Logano ended up sending Byron into the wall on the last lap in retaliation and won the race, leaving Byron in 13th.

Kevin Harvick has won the last two races on ovals. He didn’t do that well here in the spring, but the Next Gen package was still causing his team more problems than some of the other outfits at that point.