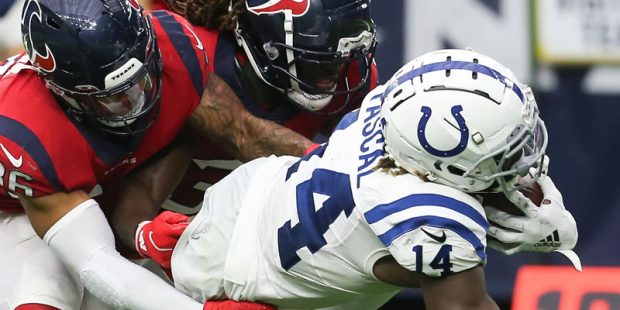 Both the Indianapolis Colts and the Houston Texans are trying to sort out their quarterback situations – but the Colts are much farther along the rebuild curve than the Texans are. The Colts have basically had a solid team for three or four years – but no consistent quarterback. The sudden retirement of Andrew Luck led to a year with Jacoby Brissett leading a run-heavy offense. After that failed to get the Colts into the postseason, they tried a season with Phillip Rivers and a season with Carson Wentz. Rivers got the team into the playoffs, but the Colts lost in the first round. Wentz had the team headed to the playoffs before collapsing in the last month of the season, and now it’s Matt Ryan’s turn. Jonathan Taylor led the league in rushing yards last year, and the defense is stout, so if Ryan can still play at a franchise quarterback level, the Colts will be tough to stop. The Texans are giving Davis Mills a chance to earn the franchise quarterback job after he did a decent job in 2021 in relief of Tyrod Taylor. The Colts visit Houston in hopes of starting a potential AFC South championship season with a big win. Will they get it? Read on for our NFL betting prediction.

Why should you bet on the Colts?

On paper, the Colts are a no-doubt playoff team. In addition to Taylor, the offense also has a solid #1 wide receiver in Michael Pittman Jr. Ryan Kelly and Quenton Nelson anchor a respectable offensive line. On defense, the Colts added Stephon Gilmore and Yannick Ngakoue to a unit that was already stout on all three levels. The real question is whether Ryan can get the job done at the age of 37. When he has had elite skill players around him, Ryan has excelled, as in 2016, when he won the MVP. But has time passed him by?

Why should you put your money on the Texans?

The good news for Houston is that they finally have gotten some value for Deshaun Watson, but most of that value will come in the future, in the form of draft picks. The offensive line looks competitive, with Justin Britt, Tytus Howard, Laremy Tunsil and Kenyon Green forming a promising young core. On defense, rookies Derek Stingley Jr and Jalen Pitre will have a chance to anchor the secondary, but if Davis Mills falters or goes down, the other option is Kyle Allen. Tailback Dameon Pierce should be able to do some damage – as long as teams can’t load the box against the run.

Houston has also done well for bettors in divisional games, covering in six of their last eight games against AFC South opposition. However, they have not started seasons well, covering just twice in their last seven September contests. If you like Houston here, you see the Colts coming in flat. They have had ways of losing winnable games under coach Frank Reich, so a Houston team with a new head coach might be able to spring a surprise – or at least a cover.

If this line were more than a touchdown, I’d be leaning toward Houston. The Colts are working in a new quarterback. However, Houston still lacks proven talent on paper, and the Colts have a lot of solid pieces that could push them to a deep playoff run. I predict a final score of Indianapolis 28, Houston 20.