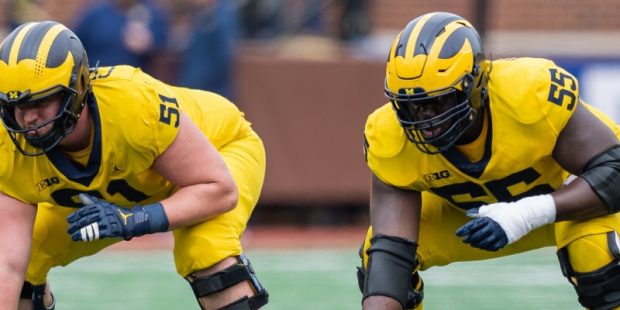 Michigan had a terrific 2021, rolling over Ohio State, winning the Big Ten and snagging a slot in the College Football Playoff. This time around, though, two of their top edge rushers have moved on, and there are other holes in the defense. Jim Harbaugh interviewed for a jump back to the NFL, only to opt to stay in Ann Arbor. Can the Wolverines keep their status as a national contender? We have some thoughts to help you pan your College Football betting for the season.

NCAA News: Are the Michigan Wolverines a National Contender?

The Wolverines have two talented quarterbacks to choose from, whether Cade McNamara starts again or the job goes to J.J. McCarthy. Harbaugh could opt to use both of them at different times, and the team also has co-offensive coordinators in Matt Weiss and Sherrone Moore, who replaced Josh Gattis, who joins Mario Cristobal’s staff at Miami. McNamara has proven leadership and the ability to run the offense efficiently. McCarthy has the bigger arm and more of the playmaking savvy, but he missed a lot of spring football with an injured shoulder.

The O-line lost two starters after winning the Joe Moore Award for the top line in the nation. Ryan Hayes returns to start for a third season at left tackle, and Zak Zinter is back at right guard. Trevor Keegan is the likely starter at left guard, and Olusegun Oluwatimi, a graduate transfer in his sixth year, is slotted in at center. Tailback Blake Corum almost hit the 1,000-yard mark but had a high-ankle sprain late in the season, which kept him from making an impact late in the season. He will return as the featured back this season.

Wide receiver Ronnie Bell returns after missing almost all of 2021 with a torn ACL. He brings veteran leadership to a mostly young group that is led by Cornelius Johnson, who had 40 catches for 627 yards and three scores last year. Mike Sainristil, Roman Wilson and Andrel Anthony round out the top of the depth chart, although the Wolverines also brought in three freshmen who could be elite next season, if not in 2022.

Michigan has its third defensive coordinator in three seasons, as Mike Macdonald is now in Baltimore with the NFL Ravens, working with John Harbaugh. Jesse Minter is the new DC, although he claims that the scheme will be the same. That means dime packages, unusual blitzes and odd-man fronts. Heisman Trophy finalist Aidan Hutchinson and All-Big Ten talent David Ojabo are gone from the pass rush, so it will be up to Jaylen Harrell, Taylor Upshaw and Mike Morris to bring pressure. This means that, early on, the coaching staff will mix rotations to find the best combinations. Even so, the group is thin and inexperienced.

At linebacker, Junior Colson and Nikhai Hill-Green got a lot of snaps last season and should be starters in 2022. The defensive backfield lost three starters, including indispensable safety Daxton Hill, but Mike Sainristil might play both ways or switch to the defensive side of the ball. Gemon Green and D.J. Turner should be the starting cornerbacks, and Rod Moore and R.J. Moten should take the safety sots.

Punter Brad Robbins and kicker Jake Moody return for another season in Ann Arbor after strong years in 2021. The return game will be different, as Ronnie Bell’s ACL injury meant that A.J. Henning returned punts and Blake Corum returned a lot of the kickoffs. Bell should be back, but the team needs to find another returner to take the work off Corum, as he is also the team’s featured tailback.

Overall, the Michigan offense should be strong again. However, with a much thinner defense, the Wolverines could experience the kind of problems that plagued Ohio State last year, as they simply could not outscore elite opponents. So as far as national contender status goes, Michigan looks to have fallen back behind Ohio State in the Big Ten once again.