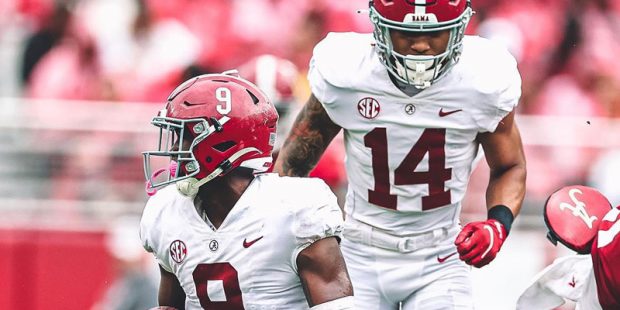 When it comes to winning the SEC football crown, the Alabama Crimson Tide have become as dominant as the New England Patriots with Tom Brady and Bill Belichick became in the AFC East and as dominant as the Atlanta Braves, under manager Bobby Cox, became in the National League West. The Crimson Tide have won seven of the last ten SEC championships and finished in a tie for the SEC West title in two of the other three years, getting edged by Auburn in tiebreakers in 2013 and 2017. In 2019, an injury to quarterback Tua Tagovailoa derailed the Tide as LSU rolled to an SEC title and a national championship. The last time Alabama appeared in an SEC Championship game and lost was 2008, when they fell to Florida. So if you’re wondering why Alabama’s College Football betting odds to win the SEC title once again show them as the heavy favorite you know why, especially with Heisman Trophy winner Bryce Young returning as quarterback.


Alabama did lose wide receivers John Metchie III and Jameson Williams to the NFL, but Ja’Corey Brookw and Jermaine Burton will step in quite nicely. Tailback Jahmyr Gibbs, a true freshman, looks like the next great running back in Tuscaloosa. The Tide does face some tests on the schedule, although I don’t think that game at Texas will be nearly as challenging as some do. They also visit LSU, Arkansas and Ole Miss, and they host Texas A&M. One of those four games could end up in a loss, but as tough as the competition in the SEC West is, it’s hard to imagine the team that manages to upset Alabama also winning the rest of their games, so the Tide should hold the tiebreaker anyway.

Georgia ended up beating Alabama when it counted most, walloping the Tide, 33-18, in the national championship game. However, Alabama had dropped 41 points on the nation’s best defense in the SEC Championship. During the regular season, the Bulldogs permitted just 9.5 points per game, along with 254.3 yards. That performance included three shutouts and nine games in which the opposition did not put up more than 10 points. However, defensive linemen Travon Walker and Jordan Davis are both in the NFL now. Jalen Carter returns on the defensive front after an all-SEC 2021. The team’s defensive coordinator from a year ago, Dan Lanning, is now the head coach at Oregon – who will face Georgia in Week 1. Quarterback Stetson Bennett completed his fifth season at Georgia with a national title, but he is not as much of a game-breaking player as Bryce Young. Tailbacks Kendall Milton and Kenny McIntosh will look to replace the production of Zamir White and James Cook, as will incoming recruit Branson Robinson. Georgia has more value than Alabama here, but while Georgia has a better shot of reaching the SEC Championship with an unbeaten record, it’s hard to argue with Nick Saban’s track record.

Texas A&M did beat Alabama last year, but they also lost four games, turning in an 8-4 record. The Aggies followed up that disappointment by drawing the nation’s top-ranked recruiting class, which prompted Nick Saban to accuse Texas A&M of using NIL deals to buy recruits. We don’t know if Haynes King or LSU transfer Max Johnson will emerge as the starting quarterback, but if the Aggies make the right choice at quarterback and their recruits pay off, they could emerge as a dark horse. But they have to win at Alabama, which they haven’t done since the days of Johnny Manziel.