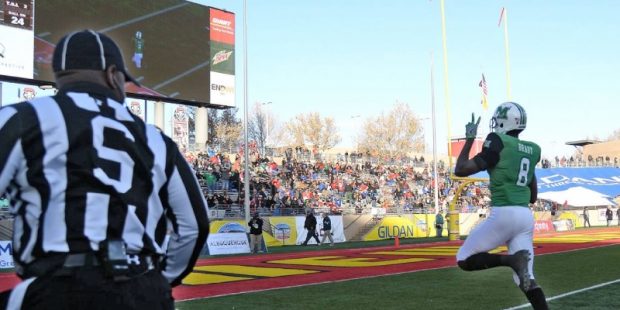 Over the next couple of seasons, the structure of college football will change dramatically. The Big 12 will lose Texas and Oklahoma to the SEC, which will take one perennial College Football Playoff qualifier (Oklahoma) and a team that thinks it should be a national championship qualifier (Texas). The Big 12 has pulled in BYU, Cincinnati, UCF and Houston, but pulling some teams from the Group of Five won’t help Big 12 teams in terms of strength of schedule and playoff consideration. The Pac-12 has lost UCLA and USC to the Big Ten – and has abandoned a strategic alliance with the Big 12 – so we could be headed to a sport that has two major leagues, the Big Ten and the SEC, and a bunch of also-rans. For 2022, though, the Power 5 conferences remain in place, so let’s look at each league’s teams’ College Football betting odds to win their conference titles.

Florida State is an interesting dark horse in the ACC, but their success will hang on the performance of quarterback Jordan Travis. Chubba Purdy left town through the transfer portal, and McKenzie Milton graduated. Travis threw for more than 1,500 yards and 15 touchdowns, completing 63 percent of his passes while throwing just six interceptions. Mike Norvell enters his third year with the Seminoles, with an 8-13 record to this point. The ACC is still wide open, as Clemson still doesn’t have an established quarterback, and Travis will have both Treshaun Ward and Oregon transfer Trey Benson in the backfield. If Clemson stumbles once or twice this season, Florida State could be poised to zip past them. After all, the Seminoles led Clemson on the road in the fourth quarter last year.

Iowa State was a widely touted dark horse last year, listed among Big 12 contenders. However, the Cyclones struggled all season long, barely gaining bowl qualification with a 7-6 slate. Coach Matt Campbell is on the hot seat after that subpar season and the loss of Brock Purdy, Breece Hall and Charlie Kolar. Hunter Dekker will be the starting quarterback, and Jirehl Brock should be the featured back. The defense was solid last year and should be good again in 2022. Can they shock a Big 12 that has its eyes on Texas and Oklahoma?

South Carolina had the #25 recruiting class in the nation after going 6-6 and beating North Carolina in the Duke’s Mayo Bowl. The transfer portal brings in Lovasea Carroll, Christian Beal-Smith – and quarterback Spencer Rattler. The defense was already solid, and the offense has a lot of talent coming in. Could the Gamecocks push Georgia and Florida in the SEC East?

Nebraska only won three games in 2021. However, all nine losses came by single digits – including close losses to Michigan, Ohio State and Michigan State – as well as Oklahoma, Wisconsin and Iowa. Casey Thompson will be the quarterback this season, and the transfer portal has brought more talent to town. It would not shock me to see the Cornhuskers take the Big Ten West title.