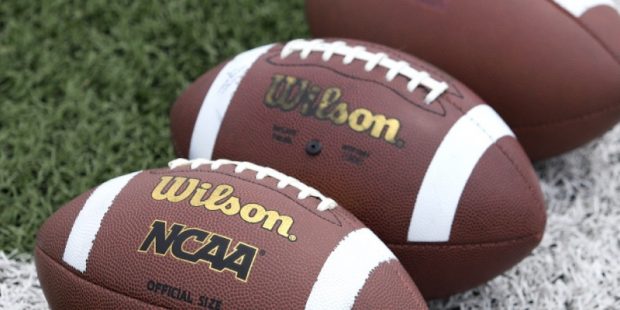 The first month of the college football season is generally reserved for non-conference games, as teams work out the kinks before opening league play. A lot of those games don’t have much sports betting interest, as big schools invite small schools to visit and take a beating, in exchange for a big check. In other cases, though, the non-conference matchups are exciting, such as Oregon’s upset win at Ohio State a year ago. Teams that want consideration for the College Football Playoff are judged by their strength of schedule, so you will see Power 5 teams play across conference lines to increase their chances of consideration. Take a look at some of the best non-conference matchups to come this fall for your College Football Betting Odds.

BYU is an independent in football and a member of the West Coast Conference in other sports. Every year, the Cougars line up difficult schedules against opponents all over the country. Arkansas is a team on the rise in the SEC West after the departure of Chad Morris. Sam Pittman has returned a sense of defensive intensity to the Razorbacks, and now they are another tough out in the most difficult division in the nation. BYU will have played Notre Dame in Las Vegas the week before; Arkansas will have payed Texas A&M, Alabama and Mississippi State before heading west.

Notre Dame is the most well-known of the college football independents, and the Fighting Irish also put together a mostly grueling schedule each season. Their annual date with USC is one of the most special traditions in the sport, and this time around, both teams have first-year head coaches. Lincoln Riley left Oklahoma behind to guide USC, while Marcus Freeman takes over at Notre Dame after Brian Kelly went to LSU. Both of these teams should be in the top 15 by the time they meet, and they might be ranked even higher. Notre Dame will have played Clemson, BYU and Ohio State before going to the Coliseum, while USC will have had tough road dates at Fresno State and Utah.

This game has a lot of hype going in, with one of the sport’s dominant teams of today visiting one of the sport’s dominant teams from decades past. The teams have not met in the regular season since 1922, but they did meet in the Rose Bowl back when Nick Saban won his first national title at Alabama. Texas’ defense will have a long day this time around, though, as the Tide still have Heisman Trophy winner Bryce Young at quarterback and got Georgia’s top wide receiver, Jermaine Burton, through the transfer portal. The Longhorns do have Quinn Ewers, a five-star quarterback prospect, and tailback Bijan Robinson and wideout Xavier Worthy, but this game should feature a bleak lesson for Texas as they contemplate moving to the SEC.

Sure, the Bulldogs don’t play this game on campus, but this is still a home game for Georgia. They meet their former defensive coordinator, Dan Lanning, who takes the head job at Oregon. Noah Sewell, a speedy linebacker, will lead the Ducks’ defense, and Bo Nix, the former Auburn quarterback, will lead the offense. This is a huge opportunity for Oregon to establish the Pac-12 as a player in the College Football Playoff conversation, but it’s hard to see the Ducks cashing in on this chance.

The Hurricanes should be significantly better in 2022. Mario Cristobal has arrived from Oregon to guide Miami toward contender status in the ACC, and his staff is also elite. Miami has Tyler Van Dyke at quarterback, but a question is the O-line. The Aggies have two choices at quarterback: Haynes King and Conner Weigman, a five-star prospect. The choice Jimbo Fisher makes will be vital to the Aggies’ success this year.