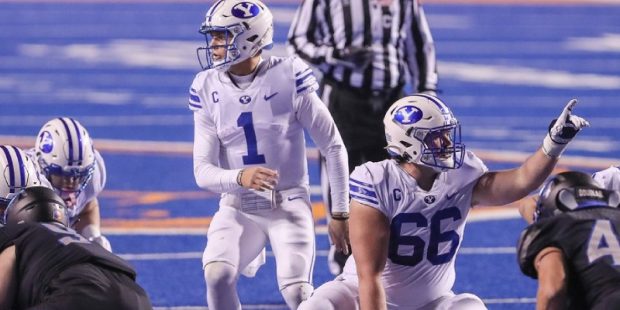 The opening week of the 2022 college football season did produce some surprises. East Carolina was in prime position to take down N.C. State, but while the Pirates did cover for their college football betting supporters, they missed a late extra point and a game-winning field goal attempt and lost by one. Delaware’s head coach was so carried away by the Mighty Bluehens’ win over Navy that he dropped an F-bomb on live television. North Carolina’s game with Appalachian State featured so little defense that the Mountaineers scored 61 points – and still lost. Arizona had a punt blocked in the Wildcats’ own end zone – by one of the Wildcats, who was just standing too close to the punter, leading to a San Diego State touchdown on the play. Moving into Week 2, let’s look at some teams likely to lose.

Old Dominion goes on the road to take on East Carolina a week after they ruined Virginia Tech coach Brent Pry’s debut with a 20-17 upset that not only gave the Hokies a loss but also led to Virginia Tech having items stolen from their locker room. Old Dominion quarterback Hayden Wolff went just 14 of 35 for 165 yards, but he made connections when it counted, including a 24-yard pass to Ali Jennings to start the game-winning drive and an eight-yard scramble on fourth-and-1 during that last drive as well. East Carolina not only hung with N.C. State on offense but got just enough defense to keep things close late. The Pirates are not known for their defense, but they shut down N.C. State in the late going. If anything, the Pirates may be looking for a new kicker for Week 2. Old Dominion to cover.

Both teams won easily in Week 1. The Bears rolled over Albany, an FCS opponent, 69-10, while the Cougars took down AAC foe South Florida, 50-21. The teams met in Texas last year, with Baylor prevailing, 38-24, behind a heavy dose of running. The teams could also meet in 2023, as BYU is set to join the Big 12, but it is not known whether the teams will play one another yet. Baylor still has a stout O-line, with four starters back from 2021 – one of just 31 schools in the nation to bring back four starters. On defense, Jalen Pitre plays the STAR position for the Bears, and he was the Big 12 Defensive Player of the year in 2021 before going to the NFL. Al Walcott moves to that position after playing cornerback for three seasons. He had a pick-six in the Sugar Bowl against Ole Miss, and he had four tackles against Albany. Expect him to contribute in a big way on Saturday. BYU quarterback Jaren Hall had a big opener, going 25 of 32 for 261 yards, with two touchdown passes and a pick. He also threw for 352 yards against Baylor, but he took five sacks – a number that has to decrease this time. Linebacker Payton Wilgar was the Independent Linebacker of the Year for the Pro Football Network last year, but he also has the hands and skills of a safety, as he has five career picks. This time around, I see BYU standing taller against the Baylor running game and being more careful with the ball. BYU to win and cover.

USC ran all over Rice in their Week 1 game, 66-14. Lincoln Riley’s offense hummed all day long, but Rice does not have the skill players on offense to give USC’s defense the sort of test that we would need to see how they will fare in Pac-12 play. Lincoln Riley’s teams generally do not prioritize defense much, and Stanford did hang 41 points on their Week 1 opponent…Colgate, which is also not a particularly impressive defense. The Trojans should be able to go up to the Bay Area and come away with a big win. Trojans to win and cover.