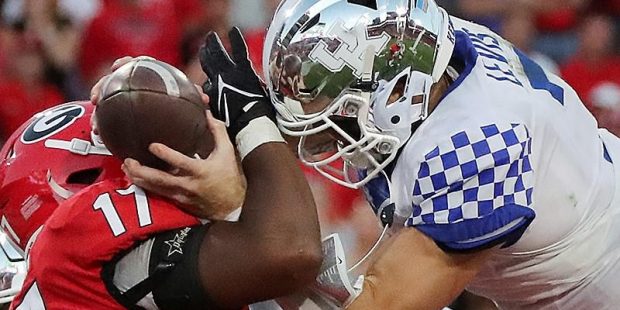 Spring football games have come and gone, and now it’s time to start thinking about College Football betting opportunities in NCAA for the 2022 season. There are a lot of questions emerging – will Alabama get back on top of the sport? Will Texas A&M turn the nation’s top recruiting class into impressive results in the SEC West? Will Cincinnati remain the nation’s best Group of Five team after the graduation of quarterback Desmond Ridder? Will Stetson Bennett regret not entering the NFL draft? Check out our preseason Top 25 rankings as well as some thoughts about some of the top programs.

The transfer portal brought Georgia receiver Jermaine Burton, LSU cornerback Eli Ricks and Georgia Tech tailback Jahmyr Gibbs to Alabama. The Tide already had quarterback Bryce Young (and his Heisman Trophy) and Will Anderson coming back. So what was Nick Saban whining about the other day? The only possible question mark, at least right now, is the offensive line.

Oklahoma State finally installed a decent defense, and then their defensive coordinator bolted, heading to Ohio State (Jim Knowles). Safety Tanner McAllister followed him in the transfer portal. The Buckeyes also have an elite quarterback, and Knowles might have the answers when it comes to Ohio State’s defensive issues.

Yes, Stetson Bennett is back, but most of the Bulldog defenders have gone to the NFL. If Kirby Smart’s next wave of recruits can fill those holes, then the Bulldogs should be able to skate to another SEC Championship. But Florida and even Tennessee might have something to say about that.

D.J. Uiagalelei has stiff competition for the starting quarterback job from five-star incoming freshman Cade Klubnik. Will Shipley and Coby Pace make an elite tailback duo. The defense has Trenton Simpson, Bryan Breese and Myles Murphy, who should all eventually go in the first round of the NFL draft.

When you have three possible quarterbacks, you might not have a quarterback. The Aggies were ranked high in the preseason last year, but except for a win over Alabama, the team largely disappointed in the SEC West. The team is loaded with five-star true freshmen, which means the ceiling is sky-high, but so are the chances for mistakes.

The Wolverines have three new coordinators (co-coordinators on offense), and with J.J. McCarthy on the shelf during spring football camp, Cade McNamara will lead the offense in the fall, at least initially. Tailbacks Donovan Edwards and Blake Corum should take some pressure off the passing game, though.

The Irish jump right into the fire, opening at Ohio State. Tyler Buchner should be the starting quarterback if he can stave off Drew Pyne. Michael Mayer is an All-American tight end, but the offense also has Lorenzo Styles Jr, Logan Diggs and Chris Tyree who can all make plays. However, it might take a few games for the team to gel under new coach Marcus Freeman.

Did you know that Kyle Whittingham will enter his 18th season coaching the Utes? That’s almost unheard of in a sport that has impatient boosters and coaches looking to move up to the top tier of programs. Linebacker Mohamoud Diabate from Miami was the top addition through the transfer portal; could the Utes repeat as Pac-12 champions?

Bo Nix looks set to take the starting quarterback role after transferring from Auburn. Seven McGee and Troy Franklin lead a young flock of wide receivers, and Byron Cardwell is the featured tailback. We will see if they are for real when they open against Georgia in Atlanta.

The Big 12 is a tight conference, and Baylor basically won the conference last year because Oklahoma State couldn’t remember how to play defense in a clutch game. With Texas and Oklahoma fading from the top, putting any of its teams higher than #10 would have more to do with the program’s name than any particular strength this year.