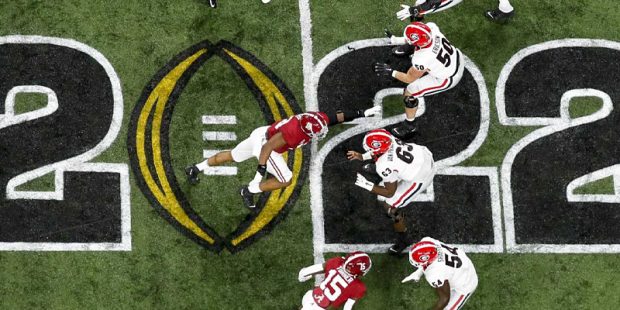 College football is coming, which means that some of the most exciting sports betting matchups of the year are on tap. One of the most popular props is win/loss totals, and one of the most tantalizing numbers in college football is 10 wins. Getting there in 12-15 games (counting the regular season, conference championships and bowl or playoff games) is a difficult feat. Which teams will do it in 2022? Here are some predictions.

Alabama brings back Heisman Trophy winner Bryce Young at quarterback, after a season when he threw for over 4,800 yards and 47 touchdowns – in his first year as the starter. Linebacker Will Anderson led the nation in sacks and tackles for loss last season. The transfer porta brought Jermaine Burton, the top wide receiver at Georgia last season, elite cornerback Ei Ricks from LSU, and tailback Jahmyr Gibbs from Georgia Tech. The toughest games on the slate this season are a Week 2 date at Texas and a home game against Texas A&M, which means that a perfect season is definitely possible.

Georgia won the national championship (but not the SEC Championship) with a 14-1 record, behind an aggressive and dominant defense. Jalen Carter returns at defensive tackle and is a nationally elite talent. Malaki Starks, Jaheim Singletary and Tykee Smith have arrived to fill holes on defense through the transfer portal. On offense, quarterback Stetson Bennett returns, and he has wide receiver Brock Bowers running routes again. Arik Gilbert came through the transfer portal to ease the loss of Burton, and tight end Darnell Washington will also catch a lot of balls.

Ohio State has C.J. Stroud back at quarterback (44 touchdowns and over 4,600 passing yards) and perhaps the best wide receiver group in the nation, led by Jaxon Smith-Njigba (over 1,600 receiving yards last season). TreVeyon Henderson scored 15 touchdowns on the ground and returns as one of the nation’s top tailbacks. The defense was a problem in losses to Oregon and Michigan, but the Buckeyes added Jim Knowles as defensive coordinator; last year he led Oklahoma State to the third overall defense in the nation.

Clemson needed a win in their bowl game to get to 10 wins last year, but they should be improved this season. D.J. Uiagalelei only threw nine touchdown passes last season (with 10 interceptions), and the Tigers were second from the bottom in the ACC in total offense. The defense is still nationally elite, led by Myles Murphy and Bryan Bresee on the D-line. With defensive coordinator Brent Venables out the door to take the head job at Oklahoma, though, this is the elite team that might have the toughest time winning ten games.

Texas A&M finished 8-4 (4-4 SEC) last year, but they did beat Alabama. Their latest recruiting class ranks tops in the nation (and led to some jealous words from Nick Saban). Top names from the class include Lebbeus Overton, Walter Nolen and Gabriel Brownlow-Dindy. But who will play quarterback? Max Johnson, an LSU transfer, is the favorite, but Haynes King is coming back from injury, so there could be a spirited competition. Jimbo Fisher needs to make the right pick at signal-caller to live up to the promise of this recruiting class – and his big talk back to Saban.

Oklahoma had better win now, with a departure from the Big 12 to the SEC on the horizon. Once the Sooners get into that league, it will be hard for them to win 8 or 9 games, let alone get a sniff of a conference championship – and forget about the College Football Playoff. For now, though, Oklahoma has a major upgrade on defense with the arrival of Venables to coach the team. Dillon Gabriel transfers in from UCF, where he had already thrown for more than 8,000 career yards. Defense has been the Sooners’ Achilles heel in recent years, but they should be more consistent on that side of the ball in 2022.