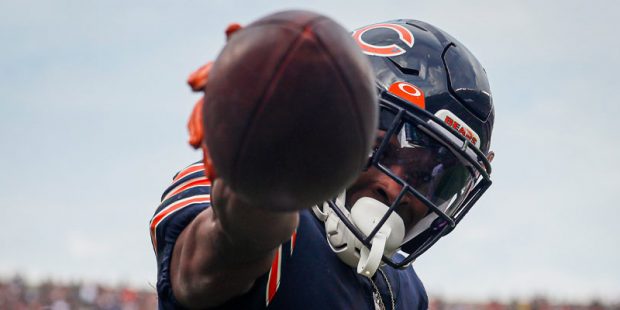 The Chicago Bears parted ways with head coach Matt Nagy after another subpar season, but it’s worth asking whether the front office had given the coaching staff enough talent on either side of the ball for the team to be competitive. Wide receiver Allen Robinson has departed without a clear replacement, which places a great deal of pressure on quarterback Justin Fields as he enters Year 2 in the NFL. One key stat: the Bears only ran 67 read-option rushes and 64 run/pass option plays. Those numbers both need to jump in 2022 given Fields’ skill set. Too often, the play called for Fields to drop back in the pocket or tuck and run on designed plays that allows the defense to figure things out and contain him. Are the Bears worth your NFL betting money in 2022? Here are some key matchups that you should consider.

NFL News: Must-Bet Games for the Chicago Bears in 2022

Given that the home team usually gets three points, this is a huge line right now, which is interesting given that the 49ers, at least publicly, are planning to turn the offense over to a youngster as well. The team has quarterback Jimmy Garoppolo on the trading block and has committed to moving Trey Lance into the starting role. Deebo Samuel has requested a trade, and while the 49ers have indicated that they don’t want to ship him anywhere, Samuel has also said that he no longer wants to carry the ball out of the backfield but instead just wants to play a traditional wide receiver role.

The Bears’ defense could also use some added talent, but they should have a solid coordinator, as Alan Williams, who was the defensive backs coach for the Colts last year, followed his former boss to Chicago, as the Bears’ new head coach is Matt Eberflus, the Colts’ former DC. Indianapolis’ defense has been outstanding the past few seasons, so the Bears should be able to give Lance a hard time in the opener. Before you lock in on this, though, keep an eye on the 49ers’ activity with respect to Garoppolo, who faces the unusual situation of getting traded after having led his team to a conference championship. Right now, though, give me Chicago to cover.

You won’t find the Bears favored in many games, but in Week 3, an even more moribund team comes to town in the Houston Texans. The team is giving Davis Mills the opportunity to prove that he can be a franchise quarterback this season, and he did have some success in the second half of the 2021 campaign. I think Justin Fields is the better of the two quarterbacks, and the Texans are just about as talent-deprived as the Bears are on both sides of the ball. I don’t think Houston will have picked apart Eberflus’ scheme well enough to target the weak links on the Bears’ defense, so this should be a happy day at Soldier Field. Chicago to win and cover.

Two rebuilding teams tangle when the Bears head to New York. We’ve seen more game film on Daniel Jones in the pros than we have out of Fields, and we know that he’s a talented runner. It will be interesting to see if the raft of injuries that Jones has suffered makes him a tentative (or at least slower) runner. We also know that Jones turns the ball over in bunches. While I don’t see the Bears turning an early spurt into a playoff run, they do have some opportunities in the early going this season, including this game. Chicago to cover.