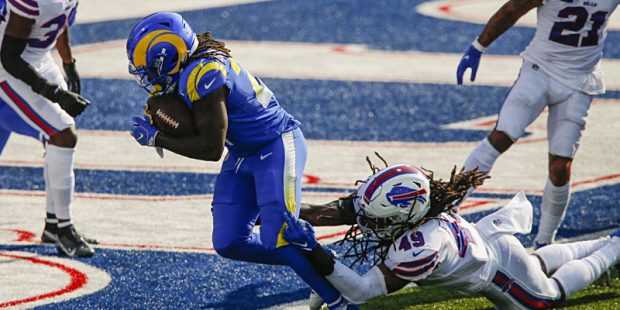 The last time we saw the Buffalo Bills, they were absolutely out of gas in Kansas City at the end of the AFC divisional playoff. The two teams had put on a track meet, particularly in the second half, scoring at a dizzying pace. It looked like the Bills had won when Josh Allen threw a touchdown pass to Gabriel Davis with 13 seconds remaining in regulation, but Patrick Mahomes took advantage of an exhausted Buffalo defense and drove the Chiefs down for a game-tying field goal. The Chiefs won the coin toss in overtime and then took the ball down to score a touchdown. So the Bills have been waiting a long time for redemption, and their chance comes in prime time against the defending Super Bowl champions – and on the road. What should you expect to see in this game? We have some early NFL betting thoughts for you to consider.

Why should you bet on the Bills?

The Bills had the top-ranked defense in the NFL last year, even though you couldn’t really tell it based on the eruption of offense in the late minutes of that playoff loss. They have added even more weapons, bringing in Von Miller for the pass rush and adding to their secondary in the draft.

On offense, the Bills were third in the NFL and tops in the AFC with 483 points on the season, and their +194 point differential led the NFL. In 13 regular-season games and both playoff showdowns, they put up at least 26 points. Their regular-season record was 11-6, and each of those 11 wins came by at least 12 points. Josh Allen picked up yards with his arm and his legs, becoming the first NFL player ever to get over 4,000 passing yards and 750 rushing yards in a season. He threw 36 touchdown passes and ran for six more scores. If the offense is up and running, the Bills should be able to find the end zone multiple times against the Rams.

Why should you put your money on the Rams?

Matthew Stafford was brought to Los Angeles to deliver a title, and deliver he did. He came in third in the league in passing yards (4,886) and second in touchdown passes (41) during the regular season. In the playoffs, he threw for 1,188 more yards and nine more touchdowns. He also had at least three touchdown passes in 10 different games, including the Super Bowl win over Cincinnati.

Stafford’s strongest connection comes with Cooper Kupp, who got a three-year, $80 million extension in the off-season. He was the first player since 2005 to lead the NFL in receptions, yards and touchdown catches; the last player to do that was Steve Smith. He finished as the NFL Offensive Player of the Year and the Super Bowl MVP after catching a pair of touchdown passes against Cincinnati. If there is a question with the Rams, it is Stafford’s penchant for turnovers, which bit him several times in the second half of last year’s regular season. It almost cost the Rams the divisional game against Tampa Bay and should have cost them the NFC Championship, when San Francisco dropped an easy pick in the late going.

It’s interesting that Buffalo is favored against the defending champions, and I’m not sure that the Bills can take on this challenge. However, I also thought the Bills might falter against New England in the divisional round, only to see the Bills run the Patriots out of the stadium. With that said, I think the Rams take advantage of the momentum that comes with celebrating a Super Bowl win at home before a game and win, 27-23.