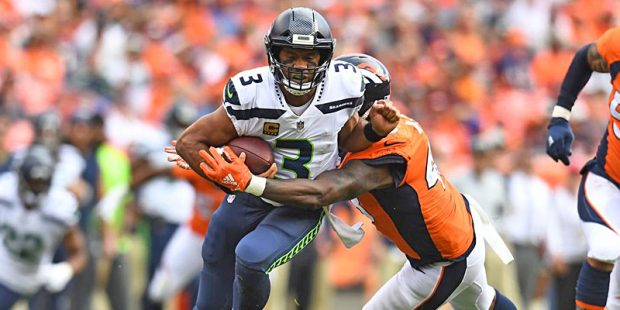 Ten years ago, the Seattle Seahawks drafted quarterback Russell Wilson out of Wisconsin in the third round, starting an era that would lead to a Super Bowl title (and another Super Bowl appearance). In the past few years, the team’s fortunes have declined, though, and as the Seahawks showed more signs of needing a rebuild, pressure grew to trade Wilson to a contender. In the off-season, the Seahawks shipped Wilson to Denver in exchange for Drew Lock, Noah Fant and Shelby Harris, with draft choices coming to Seattle as well. Wilson’s first game as a Bronco will come on his longtime home field on the season opener of Monday Night Football. Check out our NFL betting prediction for this prime-time showdown.

Why should you bet on the Broncos?

Did you know that, since the retirement of Peyton Manning, the Broncos have had 11 different players (including a wide receiver) start at quarterback, and so bringing in Wilson brought some needed stability. Denver also has a new head coach in Nathaniel Hackett, who has been tasked with getting the team back to the postseason for the first time since their victory in Super Bowl 50. Wilson and Hackett both have solid offensive resumes, and Hackett’s system employs West Coast principles and zone run schemes to build on Wilson’s strengths. Hackett was the offensive coordinator for Green Bay before coming to Denver, so he is definitely used to working with an elite quarterback.

Wide receivers Courtland Sutton and Jerry Jeudy give Wilson some outstanding targets down the field, along with slot receiver KJ Hamler. The running game features Javonte Williams, in his second year, and Melvin Gordon III. The pair split carries basically 50-50 a year ago, combining for 1,821 yards and 17 touchdowns. The offense does need a better year out of left tackle Garett Bolles. The defense was third in the NFL in fewest points permitted (18.9), but they had a hard time stopping opponents on third down and were just 21st in takeaways. They were particularly fragile against the run. With Wilson running a more potent offense, though, the defense should be able to take some more risks pressuring opposing quarterbacks and going after turnovers.

Why should you put your money on the Seahawks?

Life after Russell Wilson is going to be difficult for a while, and it will be interesting to see if coach Pete Carroll is willing to stick around for an extended rebuild as he moves into his 70s. Geno Smith or Lock will start at quarterback, and the decision has been difficult because of inconsistent performances by both signal-callers in the preseason. The running game will feature Rashaad Penny with rookie Kenneth Walker III spelling him at times, so expect a run-heavy package from the Seahawks. This should slow the game down, but even so, the Seahawks will need to show enough grit on defense to slow down Wilson and the Denver running game.

The Seahawks are moving to a 3-4 alignment on defense, and linebacker Jordyn Brooks has emerged as a leader. He had 20 tackles in the Seahawks’ Week 17 game against Arizona and set the team record for tackles in a season with 184, 17 more than Bobby Wagner’s old record. Cody Barton will be the other inside linebacker, and he has some experience to gain after starting just five times in his career. Uchenna Nwosu came over from the Chargers to join Darrell Taylor as edge rushers. Jamal Adams and Quandre Diggs return at safety, so the defense should be decent.

Pete Carroll is an outstanding coach, especially in prime time and at home, but he just doesn’t have the talent on the field to make a victory realistic. I see Denver coming in and dominating the rhythm of the game, with a 27-20 victory.