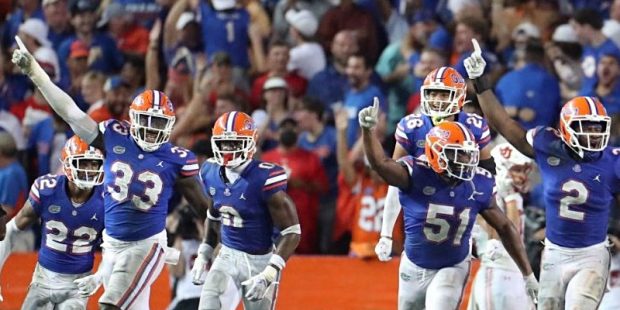 The biggest jump in the AP Top 25 college football poll came from the Florida Gators, who came into the season unranked but appeared at #12 this week after upsetting defending Pac-12 champion Utah at home in their opener. Clemson slid to #5 despite beating Georgia Tech, 41-10, because of the difficulties the Tigers had in the early going. Despite losing to Ohio State, Notre Dame only slid to #8. Houston stayed at #25 despite narrowly escaping defeat at the hands of UTSA. Check out the updated poll rankings as well as some items that may shape your College Football betting for Week 2.

The Wake Forest season looked like things were trending downward until the school got the news that quarterback Sam Hartman has been cleared to play. The three-year starter went on the shelf with what was described as a “non-football injury.” This condition was identified as Paget-Schroetter syndrome, also called effort thrombosis, which is a blood clot that is frequently connected with repeated strenuous physical activity. He had surgery on August 9 to get rid of the clot, and an ultrasound on Friday showed no new clotting. He could play on Saturday as Wake Forest takes on Vanderbilt. Last year, Hartman accounted for 50 touchdowns and over 4,500 total yards, as Wake Forest posted an 11-3 record and won the ACC Atlantic Division. Backup Mitch Griffis played well in the opener, as Wake Forest rolled over VMI in their opener, 44-10. Griffis went 21 of 29 for 288 yards and three scores. Head coach Dave Clawson has not yet committed to playing Hartman in Week 2, so stay tuned.

LSU did not have safety Joe Foucha in the lineup in Week 1 – which turned out to be an upset loss to Florida State on Sunday. At the time, there was no explanation for his absence, but coach Brian Kelly announced on Wednesday that a transfer credit issue was the culprit. Foucha had previously attended the University of Arkansas before transferring, and the credit issue has led to a four-game academic suspension, which Foucha is currently appealing. Kelly had no other comment but to reiterate his desire that Foucha can return as soon as possible. Another problem for LSU is the injury to star defensive tackle Maason Smith. He tore the ACL in his left knee during the loss to Florida State while celebrating a stop by the defense. As a freshman last year, Smith was an All-SEC pick, and the Tigers were relying on him to be an anchor of the defense. Mekhi Wingo, another sophomore, will fill his place for now.

The first SEC matchup of 2022 featuring two nationally ranked teams will not involve Alabama, Georgia, or LSU. Instead, it is the Kentucky-Florida game set for Saturday night. This is a series that Florida has historically dominated, winning 31 games in a row in the rivalry before Kentucky posted a win in 2018. The quarterback matchup should be fun to watch, as Anthony Richardson looks to follow up the terrific performance he put on in the Gators’ win over Utah. Kentucky has Will Levis, who projects as a first-round draft pick next year. Kentucky will not have star tailback Chris Rodriguez Jr, so Levis will have a lot to pull off if the Wildcats are going to get the win. Utah had 230 rushing yards against Florida, so expect Levis to do a lot of running; last year, he ran for nine touchdowns while throwing 24 touchdown passes.